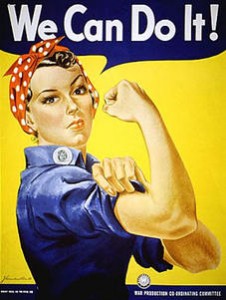 The image of Geraldine Doyle was commissioned to boost recruitment of women to work in manufacturing during the Second World War. Ms. Doyle was operating a metal-stamping machine

Ms. Doyle was a 17-year-old high school graduate when she took a job at the American Broach & Machine Co. in her hometown of Ann Arbor, Michigan in 1942, a time when millions of women across the country were going to work to replace men who had gone to war.

A United Press International photographer took a photo of her wearing a polka-dot bandana over her hair. The photo was seen by Pittsburgh artist J. Howard Miller, who was commissioned by the Westinghouse War Production Coordinating Committee to create a series of posters.

Ms. Doyle died December 26th in the city of Lansing, USA after suffering complications from arthritis.

The image can often be found today on postage stamps, T-shirts, coffee mugs and aprons.

Ms. Doyle reportedly did not realise she was the inspiration for the Rosie character, which became an icon of the feminist movement in the US, until she spotted the image in a magazine article in 1982.

“It was great for her when she finally learned about it,” Doyle’s daughter, Stephanie Gregg, told the Associated Press news agency.