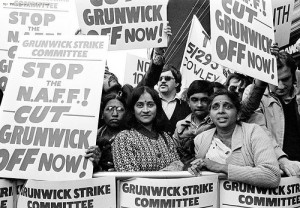 One of the key disputes in post war UK trade union history began at the Grunwick Film Processing plant, Willesden, London in August 1976 when the predominantly Asian women workforce went on strike to win union recognition. Jayaben Desai was the leader of the strikers. Jack Dromey MP was the then Secretary of the Brent Trades Council.  This obituary, written by Jack appeared in the Guardian on December 28th, 2010.

“Jayaben Desai, who has died aged 77 after a long illness, defied stereotyping all her life. “A person like me, I am never scared of anybody,” she told managers at the Grunwick film processing plant in Chapter Road, Willesden, in the north west London borough of Brent, shortly before she led a walkout on the baking hot day of Monday 23 August 1976. The events that followed contributed immeasurably to increasing the level of respect shown to newly arrived immigrant workers, many of them women – especially by their colleagues in the existing workforce.

Desperate for work, the newly arrived accepted long hours and low wages, though the need to do so, Desai said, “nagged away like a sore on their necks”. When she decided she had had enough, the 4ft10in employee told her 6ft manager, Malcom Alden, “What you are running is not a factory, it is a zoo. But in a zoo there are many types of animals. Some are monkeys who dance on your fingertips. Others are lions who can bite your head off. We are those lions, Mr Manager.”

As a result of her passion and magical turn of phrase, 100 of her fellow workers joined her on strike. Yet they were not even in a trade union. The local Citizens Advice Bureau gave her son Sunil two phone numbers – that of the Trades Union Congress and mine, as secretary of the Brent Trades Council. The TUC advised them to join the white-collar union Apex, now part of the GMB.

Grunwick was a mail-order film-processing company most of whose trade came from holiday snaps. The decision of postmen at the local sorting office in Cricklewood to black the firm’s mail almost won the dispute for the strikers. But at the start of November 1976, the Grunwick boss George Ward, supported by the National Association for Freedom, a pressure group run by the Conservative MP and publicist John Gorst, launched a legal challenge in the high court. The initiative was backed by the opposition leader Margaret Thatcher, who hailed Ward as a champion of freedom. The blacking of the sorting office was called off and defeat stared the dismayed strikers in the face. Nonetheless, they maintained their picket as winter drew on.

“We must not give up,” Jayaben told a packed meeting of the strikers, by then 130 strong, in the Brent Trades and Labour Hall. “Would Gandhi give up? Never!” The strike committee, of which I was proud to be a member, took their cause to more than 1,000 workplaces, from engineering factories in Glasgow to the coalmines of south Wales. They brought home to the big battalions of organised labour an understanding of the grim reality facing too many.

Then, on Monday 13 June 1977, the police arrested 84 pickets out of 100 who had come to demonstrate their solidarity on what was called Women’s Support Day. The campaigners were angry that the involvement of Acas, the Advisory, Conciliation and Arbitration Service, had not enabled them to obtain union recognition. Jayaben’s nationwide tour encouraged workers from all over Britain, outraged that the strikers had been sacked, to join the picket line outside the factory.

There were 1,300 by the following Friday, and 12,000 by 11 July, the day that 20,000 went on a TUC-organised march to the factory. Once again, the Cricklewood postmen took action, blacking the mail to Grunwick. Colin Maloney, their chairman, observed: “You don’t say ‘no’ to Mrs Desai.” The postmen – all white apart from one West Indian – were suspended for three weeks and threatened with dismissal.

The Labour prime minister, James Callaghan, set up a cabinet committee and persuaded the TUC and Apex to allow a court of enquiry under Lord Justice Scarman to resolve the dispute. “No employer has ever defied a court of enquiry,” said the TUC general secretary, Len Murray. “You don’t understand that we are dealing with a new breed of employer, backed by the emerging Thatcherite right,” I told him. “He will defy the court of enquiry,” Jayaben said.

She was right. Scarman was in favour of recognition and reinstatement. Ward refused to accept. James Prior, the Tory shadow employment spokesman, was supportive of the workers’ case, but to no avail. And, with the movement around the dispute wound down, there were no avenues left to win justice. After a second bitter winter on the picket line, the strikers conceded defeat on 14 July 1978.

Defiant to the end, Jayaben told the final meeting of the strikers that they could be proud. “We have shown,” she said, “that workers like us, new to these shores, will never accept being treated without dignity or respect. We have shown that white workers will support us.” Only 10 years previously, dockers had marched in support of the Conservative politician Enoch Powell, and workforces had polarised along racial lines at Mansfield Hosiery Mills in Nottinghamshire and Imperial Typewriters in Leicester.

Grunwick had witnessed the biggest mobilisation in British labour-movement history in support of fewer than 200 strikers. Defying all the odds, one courageous woman inspired all who heard her. “Mr Jack,” she would often say to me, “my English is not good.” Yet she captured in poetic language all that is best in the human spirit.

Cross-examined by Lord Scarman before the court of enquiry, Alden could not explain why the workers that Ward had described as “my ladies” had walked out. Pressed, he then recalled. “All of a sudden, she kind of exploded and said, ‘I want my freedom’ …[that] is the phrase that stands out in my mind.”

Born in the Indian coastal state of Gujarat, to the south of what is now Pakistan, at school Jayaben rejected passive obedience in favour of active support for Indian independence. In 1955, she married Suryakant Desai, a tyre-factory manager from Tanganyika – united with Zanzibar since 1964 as Tanzania – where the couple settled the following year. The east African Asians formed the mercantile and administrative classes, and Jayaben enjoyed a comfortable lifestyle. For the Desais and tens of thousands of others, all that changed with the “Africanisation” policies that saw them expelled and flee to Britain.

When they arrived in Brent, the Desais’ social status collapsed. Suryakant took a job as an unskilled labourer and Jayaben as a sewing machinist in a Harlesden sweatshop. Working part-time, she brought up their two children before going to work for Grunwick in 1974.

After the strike, Jayaben’s health declined, and she had a gall-bladder operation. A sewing job led to teaching for the Brent Indian Association, and she pioneered an Asian dressmaking course at Harrow College.

Aged 60, she passed her driving test, and found herself, finally, “a free bird”, though still in demand to give talks to students. After Suryakant’s retirement, the couple travelled to many countries. He survives her, as do their sons Sunil, later Shivkumar, and Rajiv”.

For more information on the Grunwick Dispute click here

This entry was posted in Media, Politics, Solidarity, Trade Unions. Bookmark the permalink.