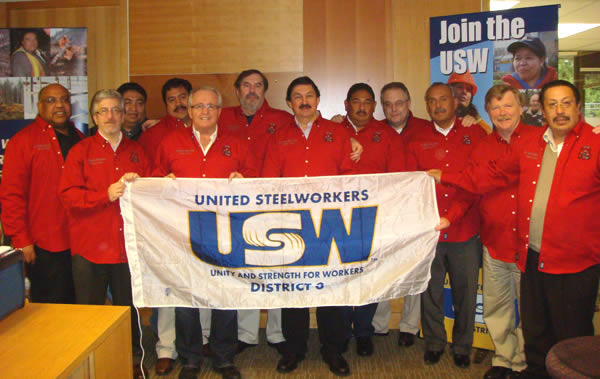 Napoleon Gomez with Leo Gerard and other USW/Los Minero's leaders.

Unite’s partner in Workers Uniting, the United Steelworkers (USW) has moved a step closer to a merger with the National Union of Mine, Metal, Steel, and Allied Workers of the Mexican Republic (Los Mineros) which when agreement is finally reached will create a giant North American union.

According to the USW both sides met in December in Vancouver, Canada to move forward on their joint commitment “to propose immediate measures to increase strategic cooperation between our organizations as well as the steps required to form a unified organization.”

Meetings with Los Mineros take place in Canada as Napoleon Gomez the leader of Los Mineros (Mexico’s fastest growing union) is in exile in Canada following trumped up charges against him by the Mexican government which is currently waging war against independent unions in Mexico.

A press release from the two unions sets out the steps both sides will take to effect a merger.

“A joint committee of members of the Executive Boards of both unions was formed and, following intensive communication over the past months, met together to agree on concrete next steps.

The joint committee, as well as USW International President Leo W. Gerard and General Secretary Napoleón Gómez Urrutia of the Mineros, reviewed the legal and political attack on the Mineros in Mexico and discussed ways to, through their joint efforts, continue to improve the wages, benefits, and working conditions of workers throughout North America. The Steelworkers noted that, despite the attacks, the members of the Mineros continue to support their union, which continues to negotiate the largest wage and benefit increases in Mexico, at least three times greater than the average and often more.

The Mineros noted the success of the Steelworkers (who have members in the U.S., Canada, and the Caribbean) in taking on multinational corporations in North America and beyond.

They also reviewed the success of their joint organizing and negotiating efforts, which have added more than 4,000 new members to the ranks of the Mineros this year alone, with an emphasis on companies employing members of both unions.

They also took responsibility for working to ensure the success of the international Days of Action on February 14-19, 2011, when union members will demonstrate their support for the Mineros in front of Mexican Embassies around the world.

The group agreed to form sub-committees to better understand the structure of each union in order to consider ways to better integrate the two unions, and scheduled a follow-up meeting for January. Frequent meetings will follow, as the joint committee seeks to accelerate its work to make the vision of a single North American organization dedicated to the improving the well-being of working people across the continent, a common goal of both the membership and the leadership of both unions”.