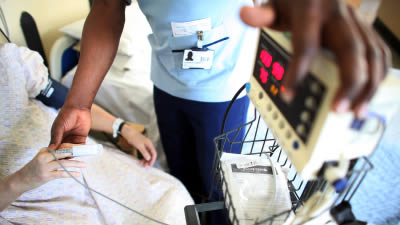 If this isn’t an ideological Government, I don’t know what is.

The so-called “ring-fencing” of the NHS is proving to be a cruel hoax.

Not content with driving through change – NHS bosses have put into action a plan revealed earlier this year, when Danny Alexander’s notes were snapped by the media – including a reference to staff taking pay cuts to reduce job losses.

They have now cocked the pistol and put it to the  heads of NHS  workers with the threat that if they don’t accept a two year pay freeze then tens of thousands of co-workers will face the sack.

Over a million staff earning up to £34,000 are being asked to give up annual salary rises – on top of a two-year pay freeze – in return for a “guarantee” of no compulsory redundancies.

35,000 workers could face the sack if the deal is rejected.

Unite’s National Officer for Health Karen Reay, said: “If you don’t accept these swingeing proposals, other people may lose their jobs. This is a blunt threat by employers and a negatively emotive way of trying to do business.”

Doctors’ leaders also say it exposes Government claims the NHS budget was being protected as false.

Shadow heath secretary John Healey said: “This shows a Government intent on picking on the lowest-paid nurses and other frontline NHS staff. It is not what people expected when David Cameron said he’d protect the NHS. The Government could in fact ease pressure on the NHS if it kept its promise to increase, not cut, funding and called off the big internal, high cost reorganisation it has planned. The £3bn this is set to cost should be spent on ensuring better care for patients.”

Over the past few years many workers in the private sector took pay cuts, suffered pay freezes or major changes to working conditions on the promise that it will protect jobs. This has proved to be nonsense – jobs have still been lost in the long run.