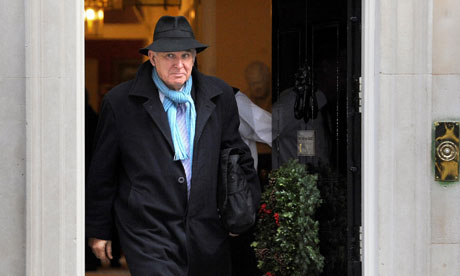 As most everyone will know by now Vince Cable says he has the nuclear option available to blow the coalition apart.

In an amazing interview with two Torygraph reporters posing as “worried mums” he spilled the beans on the fights going on in the coalition government – which demonstrate that the Government is both idealogical and hardline right wing, hell bent on driving through policies at breakneck speed using the financial crisis as cover.

If Cable does go “nuclear” at some point – or his nifty footwork can’t save him and he is forced to resign – David Laws is ready and waiting to make a quick comeback and do the Tories bidding.

Breaking News: Media and blogs reporting that Vince Cable has told Torygraph reporters (posing as “worried mums”) that he has “declared war on Rupert Murdoch” over the BSkyB deal.

Ofcom is due to report to Vince Cable – who then has to decide whether to refer the matter to the Competition Commission for a full investigation of the plurality issues at stake.

At the end of that investigation, Cable is required to make a decision on whether or not to abide by the CC’s recommendation. He can block the proposed bid, to allow it unconditionally or to allow it if certain concessions are made.

Vince Cable told the Torygraph undercover reporters: ”I am picking my fights, some of which you may have seen, some of which you haven’t seen. And I don’t know if you have been following what has been happening with the Murdoch press, where I have declared war on Mr Murdoch and I think we are going to win. I have blocked it using the powers I have got. They are legal powers, so I can’t politicise it, but for people who know what’s happening, this is a big, big thing.”

This statement was not included in the Telegraph’s original report of its undercover sting but the tape has been leaked to Robert Peston, the BBC’s business editor.

A spokesperson for the Dirty Digger said: “News Corporation is shocked and dismayed by reports of Mr Cable’s comments. They raise serious questions about fairness and due process.”

Political blogs betting that Vince will be on his bike by Christmas Day – if not before. How much more have the the Torygraph got? If VC does go don’t forget we will get a right wing replacement in David Laws.

Latest: Cameron bottles it. Shabby deal all round. Tories say if it was one of there’s he would have been out pronto. He can’t sack Vince Cable without creating a rallying point for disaffected Lib-Dems – so he out of Ofcom/BSkyB scene, stays in Cabinet. The Dirty Digger will have plunged the knife in.  Fleet Street (as it used to be called) have sniffed blood. Probably more to come.

I like the guy. I held out hope he might end up being the axle of progressive politics in Britain. Yet it’s hard to resist the urge to slap Vince Cable around the chops.

Six months into the Conservative-led government, he’s left himself looking like, and let’s not mince words, he looks like a cock. What a total ignoramus. What a self-indulgent buffoon. What a hypocrite. For the protection of his own dignity, he should resign.

There are two winners out of this episode: David Cameron and Rupert Murdoch.

“Rather than worry about Rupert Murdoch owning another TV channel, what we should recognise is that he has probably done more to create variety and choice in British TV than any other single person because of his huge investment in setting up Sky TV which, at one point, was losing several million pounds a day.

We would be the poorer and wouldn’t be saying that British TV is the envy of the world if it hadn’t been for him being prepared to take that commercial risk. We need to encourage that kind of investment”.

“Somewhere between 2015 and 2020, News International, Sky will control 50% of the newspaper and television markets respectively…..They will have a force de frappe which none of their competitors can match, while the BBC’s income will be negotiated downwards, and ITV simply lives with the ebb and flow of the advertising market”.

So, the company that hacked the phones of the royal princes will own half the newspaper and television market in Britain. If this was Zimbabwe, we’d be sending resolutions to the United Nations about it. It’s not though, and Jeremy Hunt, easily the most ambitious member of the cabinet, will make the decision.

That’s why Cable has to go. He can’t do his job. We trusted that he would do the right thing. Faced with the indisputable truth about media plurality in Britain we were counting on him to face down all opposition and for the first time in decades, stand up to Rupert Murdoch. And now he can’t.

Do you think that Jeremy Hunt, having said what he said about Rupert Murdoch, is going to go against his instincts and turn down News Corp’s bid for complete control of Sky? No. Neither do I.

Like Clare Short in Tony Blair’s administration after the resignation of Robin Cook, Cable’s days are numbered. I can’t understand how he can allow the public humiliation to last longer than today. But ministerial office does that to some people. They can’t let it go.

In choosing a slow lingering death, Cable has further weakened Clegg and the coaltion partners, though they appear too frightened and stupid to know this.

It’s inevitable. He’s broken one of the rules of being a minister. It’s probably the third rule concerning standards in public life. The one that says:

“In carrying out public business, including making public appointments, awarding contracts, or recommending individuals for rewards and benefits, holders of public office should make choices on merit.”

We’ll no doubt be arguing about this for days to come, but we already know that Cable has broken the even bigger rule of ministerial life: don’t believe the hype. His own ego has destroyed him.

The Cable incident is another unforced error from a ragged government. Paradoxically, it helps Cameron as he strengthens his grip on a coalition government that has been shown to be paralysed by disagreement and personal loathing between ministers.

My God, what a mess though. And we’re only six months in.

This entry was posted in Politics. Bookmark the permalink.