On 10th May, Metin Külünk, a deputy of the ruling political party, proposed an amendment to Article 29 of the existing Collective Labour Agreement, Strike and Lock-Out Law as follows: “It shall not be lawful to call a strike or order a lock-out in the following activities … Banking, public notaries and aviation services.” Such an amendment would be a serious blow to the right to strike in Turkey and will bring major loss of income and hard-won rights for unionized aviation workers.

This repressive parliamentary motion is now the subject of an ILO complaint submitted by the International Transport Workers’ Federation (ITF).

As a reaction to this unprecedented attack Turkish Airlines workers went on mass sick leave on May 29th, 2012, at 3am. In fact Turkish Civil Aviation Union (Hava-İş) members have been left with no alternative other than taking this latest action.

On the very same day hundreds of them received text messages to their phones informing them that they were sacked without compensation. 305 workers have now been sacked. 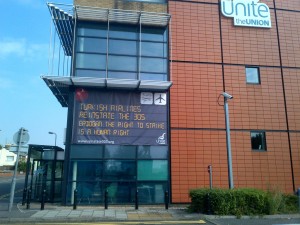 Unite is supporting the campaign to re-instate the 305 workers and scrap this attack on the right to strike.

Back the campaign with LabourStart