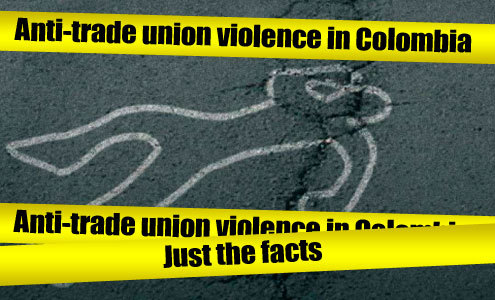 In a press release issued on August 9th the global union Workers Uniting has expressed its continuing concern for the grave situation confronting trade unionists in Colombia upon hearing of the pact recently signed by the government of Colombia, the U.S. Labour Department and the International Labour Organisation (ILO).

Workers Uniting is the international union created by Unite, the biggest union in the UK and Republic of Ireland, and the United Steelworkers (USW), North America’s largest private sector union.

While this pact is certainly welcomed to the extent that it purports to protect labor and human rights in Colombia as the U.S./Colombia Free Trade Agreement is implemented, Workers Uniting strongly disagrees with the signatories’ assessment that labour rights in Colombia have improved “significantly.”

This assessment illustrates an apparent lack of understanding for the reality on the ground in Colombia.

“The self-congratulations of these signatories comes just as Colombia was again declared the most dangerous country in the world to be a trade unionist by the International Trade Union Confederation, which reported 29 Colombian unionists killed in 2011“, said  USW International President Leo W. Gerard.

Len McCluskey, Unite UK General Secretary, said: “We are just over half way through 2012 and by our count 16 unionists have already been murdered in Colombia, including seven killed in the last six weeks.   We note with particular grief the fact that, of the 16 unionists killed so far this year, five were from our partner union, FENSUAGRO.  Just yesterday, we expressed our grave concerns over the attacks against FENSUAGRO to Colombian President Santos, and told him that we are asking the European Union (EU) Parliament to reject the proposed Colombia/EU Free Trade Agreement in light of such continued violence.”

According to Gerard, “the USW also lost a great friend in Hernan Alvarez Alonso Pepper, a member of the union SUTIMAC which has been directly assisting the USW in organizing and contract negotiations with ARGOS in Harleyville, S.C.”

Meanwhile, though Colombian President Juan Manuel Santos claimed that the new pact “is a ratification of the commitment of the government…to protect human rights and the rights of workers increasingly and effectively”.

Workers Uniting has grave doubts about the sincerity of this commitment.

Despite the spike in union killings in recent weeks, Workers Uniting was recently informed by Colombia’s largest union confederation, the CUT,  that the Colombian government cut funding for labor and human rights activists under government protection, including to Aidee Moreno, the head of FENSUAGRO’s human rights department.   This cut compromises the ability of labor and human rights leaders under threat to safely travel throughout Colombia.

If the Colombian and U.S. governments are truly committed to labor and human rights, they will provide the necessary funding to return this support in full to those under protection.

Finally, Workers Uniting notes with alarm the grave situation of seven former General Motors workers. After camping in front of the U.S. Embassy in Bogota for more than a year, the workers have sewn their mouths shut and begun a hunger strike to protest their firings because of workplace injuries.

“Such an act of desperation demonstrates the dire situation confronting working people in Colombia and demands attention by the Colombian and U.S. governments,” said Leo Gerard.