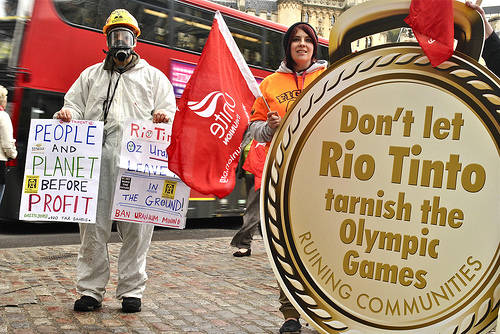 Immediately resuming negotiations for a $4 billion aluminium plant in Paraguay following the recent coup d’état, IndustriALL Global Union has called upon Rio Tinto to publicly disclose its interest and involvement, if any, in the coup d’état in Paraguay and the ousting of a legitimately elected democratic government of Fernando Lugo.

“Rio Tinto, which has a legendary association with the government of Canada, has been quick off the mark to resume negotiations on behalf of Montreal-based Rio Tinto Alcan for a $4 billion aluminium plant,” writes Jyrki Raina, General Secretary of IndustriALL Global Union, in a letter to the CEO of Rio Tinto Alcan. “Prior to the coup, these negotiations had stalled over a disagreement over the price of energy that Rio Tinto Alcan would need to pay for the operation of the smelter.”

Access to low priced energy is central to the profitability of aluminium smelters and Rio Tinto has a poor track record in terms of how it secures access to energy, frequently with guaranteed prices or subsidies, and no accountability by governments, such as seen at Rio Tinto Alcan in Alma, Québec and Simandou in Guinea.

IndustriALL Global Union is campaigning to shine a light on Rio Tinto’s unethical behaviour around the world. IndustriALL supported United Steelworkers members at Rio Tinto Alcan’s facility in Alma, Quebec during a six-month lockout that ended in July. The cost of the company lock-out to the region is estimated to have been C$2million per week, including the controversial agreement whereby Hydro-Québec bought back unused electricity from the company while the lockout was on-going.

IndustriALL Global Union also wrote to the Prime Minister of Canada expressing dismay over his rapid recognition of the coup government in Paraguay, which occurred at the same time as several governments in South America indicated they would not recognise the government of Federico Franco.

The democratically elected government of Fernando Lugo was ousted just 32 hours after a pseudo-legal impeachment occurred based on false accusations and no evidence. Fernando Lugo said about the coup, “Here, there was a rupture of the democratic order, here there was a political trial without any reason, and a parliamentary coup was carried out…”