Time for our leaders to face up to the facts: Austerity is killing jobs and the recovery 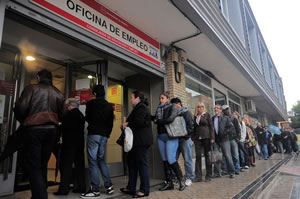 The European Trade Union Congress – the umbrella group for EU trade unions and union federations – has called upon politicians, EU officials, academics and employers meeting this week in Brussels to face up to the failure of austerity programmes across Europe and adopt an alternative economic strategy.

The latest EU unemployment figures are described by the ETUC as “disastrous”. Unemployment has increased virtually each month over the past year reaching record levels.

More than 25 million people are now looking for work across the EU – and worse is yet to come.

While the ETUC says some of the proposals set out in the Employment Package – structural labour market reforms in the form of deregulation of employment protection; undermining and dismantling collective bargaining structures; and promoting more flexible and precarious employment – will not create sustainable new and skilled employment.

Instead they are substituting decent jobs with low skill jobs hampering the recovery. The International Labour Organisation’s latest Global Employment Outlook (pdf) also confirms bleak employment prospects for the young unemployed, with 50% youth unemployment in Greece and Spain. As an alternative ETUC has proposed a Social Compact for Europe (pdf) setting out the alternative to austerity.

As ETUC General Secretary Bernadette Segol, who will address next week’s Trades Union Congress in Brighton, said at the EU conference: “It’s time our leaders faced up to the facts: austerity is killing jobs and no amount of discussion on reforming employment policy will disguise that basic fact. The European trade union movement stands ready to face up to the challenge and our responsibilities: we call on our employer social partners at European and national level to do the same. Europe’s workers demand and deserve nothing less.”.