Kerching! Download your copy of the gossip magazine for celeb tax dodgers 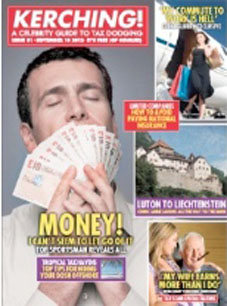 Ahead of next weeks Congress the TUC has published Kerching! – a celebrity gossip style magazine – aimed at embarrassing the Coalition government into taking action against celebrity and sports star tax dodgers.

Kerching! A Celebrity Guide to Tax Dodging lists the top ten ways celebrities, sports stars and big corporations us to get around the rules. These include offshore trusts, use of Gift Aid and an extensive use of tax havens such as the Bahamas, Mauritius and Panama.

The 8 page magazine describes the ten steps George Osborne could take to tackle tax avoidance bringing in cash to the public coffers.Amongst the top ten tax-avoiding tips outlined for celebrities wanting to hide their cash

The UK’s tax residency rules are also used by celebrities and sports stars, says the TUC. Anyone spending less than 90 days a year in the UK can claim to be a non-resident, and because the definition of a day for tax purposes is open to interpretation, top earners can be in the UK for up to four days a week, 40 weeks a year, and still avoid paying tax.

TUC General Secretary Brendan Barber said: “The overwhelming majority of people in the UK have little choice over the amount of tax they pay and unlike big corporations and super-rich celebrities don’t have the means to employ expensive accountants to help them avoid paying their fair share of tax. The Chancellor has said he finds tax avoidance morally repugnant – so do we and that’s why we want him to act. Closing down the multiple loopholes which super-rich celebrities and their accountants jump through on a regular basis could make a huge difference to our public finances and take the pressure off the little people who are bearing the brunt of the government’s austerity measures.”

The ten simple steps the TUC’s says the government could take to crack down on tax avoidance include: