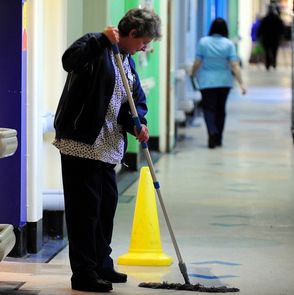 In a blog posted on the Liasion Committee For The Defence Of Trade Unions website Unite’s Adrian Weir flags up proposals by the extreme right wing Conservative Free Enterprise Group pushing the idea of the introduction of German style low paid, no employment rights, service sector jobs as a way of creating employment – dubbed mini-jobs.

On a recent visit to Germany and in meetings with union officials from the DGB I learned that these jobs were roundly criticised by unions for ghettoising workers, mostly women, in low skilled jobs that were expensive as those taking on these jobs were tax exempt and paid no social insurance.

Stephanie Blankenberg writing on the Guardian’s Comment Is Free blogsite pointed out that mini-jobs are not working in Germany, where they were introduced as a way of creating employment.

Mini-jobs were introduced in Germany, (where there is no national minimum wage),  in 2003 under Gerhard Schröder as part of a wide-ranging labour market reform. As Stephanie says: “German mini-jobs are just what it says on the tin: precarious employment for up to €400 (£315) per month, likely to be extended to €450 in 2013. Whether a mini-job is an additional or a main job, mini-jobbers are exempted from tax and social insurance payments for earnings of up to €400, and employers’ social insurance contributions are considerably below those for equivalent regular jobs. Mini-jobbers forgo core benefits of regular employment, such as building up pension claims. Beyond a basic threshold, income from mini-jobs also entails the reduction of unemployment benefit for recipients”.

The reality is that mini jobbers are using these jobs as a second job to top up low paid earnings from other employment. Most of the mini jobs are in the low skilled service sector such as hotels and hospitaility – not the high skilled manufacturing sector where job creation will help rebalance the economy as the Government says it wants to do in the UK. The jobs are also expensive as they are tax and social insurance exempt.

The simple truth is that mini-jobs are not working in Germany, and neither will they in the UK.

Mino jobs were sold  as a way to bring the long-term unemployed back into the labour market. The theory was that employers would eventually hire mini-jobbers on a permanent basis.

Holger Bonin, labour market expert at Germany’s ZEW think-tank told the FT: “Long term unemployed find it harder to get a full-time job now as these jobs don’t exist any more. Full-time jobs are being divided up into mini jobs. One should be very sceptical about introducing such a system.”

In the UK, Len McCluskey,of Unitewarned the scheme would lead to an “underclass” of workers without real prospects. “Mini jobs are a sticking plaster, a quick fix, which threatens to create an even more divided society,” he said.

Stephanie Blankenberg also hits the nail on the head in her blog saying: “Wages are costs for employers, but they are also the income that buys their products. Low-wage policies have had their day and have failed to produce the promised outcomes. Employers now need markets, and workers need jobs that pay to make a decent living. The solution is obvious, and it doesn’t include mini-jobs.

Read the full blog with links to reports on mini-jobs by clicking on the link above.