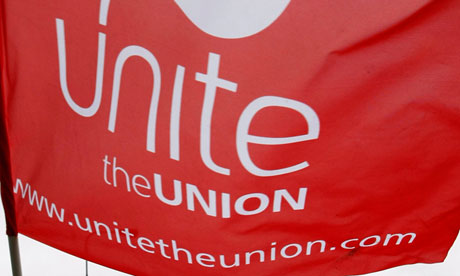 Just back from the TUC in Brighton. Impossible to do blogs and even tweet from inside the hall and at the hotel – rubbish wi-fi at both.

So here’s the press releases and statements from the speech’s or comments I made in Brighton.

On Manufacturing
Government’s ‘march of the makers’ condemned as a cruel hoax by Unite
Tony Burke, assistant general secretary for the country’s biggest union, Unite, today (Monday 10 September) accused the government of a “cruel hoax” and of critically undermining the economy due to a lack of a manufacturing strategy. Speaking at the TUC Congress in Brighton, Tony Burke, will say: “The coalition’s pledge to deliver a ‘march of the makers’ was a cruel hoax.  The government is failing to take the action necessary to deliver on the promise of new jobs in manufacturing. As a result the UK economy remains in the doldrums.  This was all too vividly shown last week when theOECD predicted UK GDP would shrink by 0.7% this year.”

Instead of delivering a growth strategy, Tony Burke will accuse the government of, “presiding over a slide towards ‘part time Britain’ and condemning millions of people to unemployment and under-employment.”

He will go on to say: “This has left us wallowing in a double dip recession. Our economy urgently needs a Plan B – a real industrial strategy – with targeted support for small and medium sized companies. We need a British investment bank, a new skills framework and a national procurement policy to get UK manufacturing moving again.

“In Germany they don’t leave their long-term future to chance. Instead they invest in technology, research and skills, as well as medium sized companies and importantly people. This active industrial approach has allowed them to deliver the growing economy that the UK so desperately needs.

“To be successful we need to make Britain ‘the Workshop of the World’ again, with well paid, skilled jobs that provide stable employment and decent jobs”.

On Beecroft proposals on employment rights for The Manufacturer:
“Tory ministers are licking their lips and trying to use the economic crisis as an excuse to take us back to the dark days of Thatcher. There is not a shred of evidence that Beecroft type proposals will get the economy growing. It would simply turn workplaces into places of fear and give a bully’s charter to rogue employers. We should be talking about how we are going to kick start the economy and get people into jobs, not firing”.

The government will miss the opportunity to inspire a strategic, growth-led recovery of the economy if it presses ahead with ‘half baked’ proposals for a British `business bank’, Unite, the country’s biggest union, warned today (Tuesday 11 September).

Responding to the news that business secretary Vince Cable will announce a ’business bank’, Tony Burke, Unite’s assistant general secretary for manufacturing, said: “The idea of a national bank to invest in industry and rebuild our economy is a sound one, and a move that is urgently needed.

“Sadly, the proposals floated today will not deliver this.  Instead of the confident commitment of the government to put money into the economy, we can expect warm words, a website and a bank without any money.

“Vince Cable will miss an important opportunity.  It looks as if a great idea has been mangled by those within this government who simply will not accept that it must step up to the task of rebuilding our economy.

“It would be criminal if the UK were again left without the structural support from government that other nations, like Germany and Brazil, can confidently expect from their governments.”

Unite says that to work well, a state investment bank needs to be fully resourced to:

On the Leveson Inquiry
Legal hitch to union recognition at News International needs to be repealed, Unite says

A legal technicality that makes it almost impossible for trade unions to represent staff at Rupert Murdoch’s News International needs to repealed, Unite, the largest union in the country, said today (Monday 10 September).

Unite assistant general secretary, Tony Burke made the call during the TUC Congress debate on the Leveson Inquiry.

He linked News International’s alleged illegal activities with the lack of trade unions which would have acted as a brake on the scandals that have now broken over the Wapping headquarters.

Tony Burke said: “We have to look at how this happened – and it didn’t happen overnight. The culture at News International was set at the very top.

“Unite argues that the absence of trade unions contributed to an alleged culture of wrongdoing. Our unions warned about the consequences of a de-unionised workforce.

“The immunities from trade union recognition legislation in the 1999 Employment Act, given to Murdoch by New Labour, have ensured that strong independent unions can never get recognition at News International.

“This legislation relating to union recognition was designed to honour a commitment to require employers to recognise trade unions where the union could demonstrate majority support.

“But the News International Staff Association (NISA) – Murdoch’s in-house union – was not and is not an independent trade union, and was denied a certificate of independence by the Certification Officer in 2001.

“Tucked away in the corner of the legislation is paragraph 35(4) – an incomprehensible provision which  gives an immunity from the duty to recognise a trade union, where there is a “pre-existing arrangement” –  such as NISA.

“It is true that the legislation provided a procedure for the de-recognition of bodies like NISA. But this a non-starter. It would require an employee of News International to ask for a full de-recognition ballot to be held, and to provide evidence of support for his/her request from the workforce as a whole.

“In News International, this would be like turkeys voting for Christmas.

“Even in the USA, this kind of arrangement would be unlawful and, importantly, it is inconsistent with the requirements of international law. Paragraph 35 is as an affront to free trade unionism – it contributed indirectly to the appalling activities of some of the journalists and management at News International.

“Unite believes Leveson should change things for the better – but paragraph 35 has to go in order that free and independent unions, such as the NUJ and Unite, can stand up and put a stop to the kind of activities that happened at News International through a proper code of conduct.”