A Plug For Kevin Halpin Biography 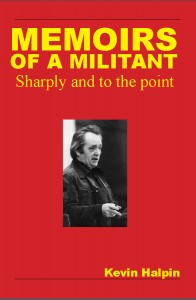 Got this at the TUC – only ‘skimmed read’ it as yet but its is worth checking out….

“One of Britain’s leading communists, Kevin Halpin has been a fighter all his life. As a child in Preston, he fought the poverty that saw his grandmother die in the workhouse. After the death of his mother, seven-year-old Kevin fought an increasingly harsh father. At school, he fought the teachers who dished out six of the best for questioning religion, and in the streets, he was a champion scrapper.

Later he fought the Nazis in the Mediterranean before going on to become one of the noted leaders of engineering and other workers in a lifetime of struggle forjustice and a better world.

Through it all his wry sense of humour has kept him cheerful while sustaining those around him. A love of cooking and a keen enthusiasm for invention has also marked the career of this remarkable man.

His sharp observation of the world around him from early childhood onwards helps to make his account of a life lived to the full both readable and inspiring, with many a chuckle at the ironies of human nature.

Kevin has divided his account of life through the 20th century and beyond into 15 chapters.

They cover his early years in Preston; his wartime service in minesweepers; joining the Communist Party and the start of his main working life back in Britain, together with his growing Marxist education.

There’s a detailed examination of the impact of the historic 20th Soviet Communist Party congress and its impact on political thinking in Britain. Accounts of political activity, historic strikes, blacklisting and the crises within the communist movement spring to life as Kevin weaves through them the pithy and humorous observations of a man who was there, saw it all and understood what was happening.

This is a book which casts new light on the development of left politics in Britain and beyond throughout the past 70 years. It is an unassuming account by a remarkable man, whose contribution to political and industrial life offers lessons for today”

Click on the graphic for a link for more information and where to buy it.

1 Response to A Plug For Kevin Halpin Biography