Horror in Pakistan after 300 workers die in two factory fires.

Over 300 workers were killed in devastating factory fires on 11th September at a garment factory in Karachi and a shoe factory in Lahore, Pakistan.

Media reports indicate that workers could not escape the fire because the factory buildings lacked basic fire safety standards and emergency exits.

The fire at Ali Enterprises, the garment factory located in Hub River Road, Sindh Industrial Trading Estate (SITE) in Karachi killed more than 289 workers. Many of them died of suffocation as they were trapped in the basement.

Large number of workers suffered grievous injuries as they jumped from the building to safety. The factory was established illegally and not registered under the the country’s Factories Act. The four story garment factory had only one exit and with no fire fighting or extinguishing instruments.

All windows were iron grilled and doorways and stairs were stuffed with finished or semi finished merchandise.Being a pay day, as many as 1,000 workers were in the factory at the time of the fire accident. The basement of the factory is filled with water that was used to extinguish fire and it is feared that many dead bodies are still under the rubble. It is also reported that the identification of the dead became a critical issue as large number of workers were on third party contract with no appointment letter and not registered with government social security institute or worker welfare board.

In another fire accident at the four-story shoe manufacturing unit at Lahore about 25 workers were killed. The factory is said to be located in residential area of the city. Initial reports suggest that the accident occurred while workers tried to start generator during the power cut and sparks from the generator came in contact with chemicals used to make the shoes.

IndustriALL Global Union joined with affiliates the National Trade Union Federation (NTUF), Pakistan Metalworkers’ Federation (PMF), The Pakistan Federation of Chemical, Energy, Mine and General Workers’ Unions (PCEM) and Federation of Textile, Garments and Leather Workers criticized the negligence of the government authorities and demanded immediate action against factory owner and appropriate compensation for the families of dead and injured workers with free medical treatment.

In a letter to the Prime Minister of Pakistan, Jyrki Raina, General Secretary of IndustriALL wrote, “The 2010 Pakistan Labour policy has among its objectives the following: Just and humane conditions of work be guaranteed to all workers. We very much would like to see this be finally applied to the garment and shoe-making workers in Pakistan who constitutes 30 per cent of the workers in the country and who have some of the most inhumane working conditions.” 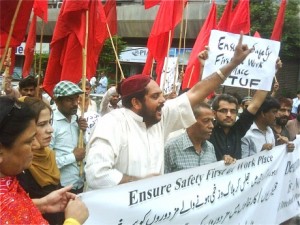 Nasir Mansoor, General Secretary of NTUF said, “Factories in Pakistan more like death trap than the work places, workers are treated more like slave than human being.”

In a street protest organized on 12th September, the NTUF called for the strict inspection of factories in coordination with workers’ representative bodies, registration of all factories under the Factories Act, implementation of health and safety laws in true spirit, abolition of contract system, issuance of appointment letter to all the workers at the time of employment and registration of workers in welfare schemes.

NTUF is also supporting the nationwide strike call given by the Pakistan Labour Party on 15th September to stand in solidarity with victims’ families.

You can take action and send a letter to the Pakistan Prime Minister today by clicking here or on the IndustriALL logo above.