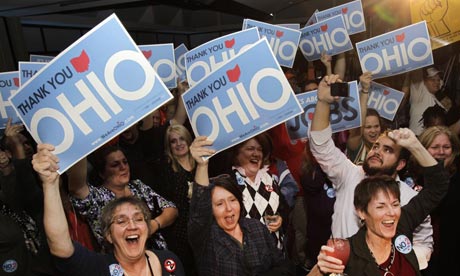 It follows months of painstaking work and campaigning by unions and their members and will build momentum for other battles to come notably in Wisconsin, where state govenor Scott Walker has also imposed draconion anti-union legislation. But his turn is coming. Next week will see the start of the campaign in earnest to collect signatures to force a recall vote on Walker. With unions already on the ground in Wisconsin they need to collect more than 540,000 signatures to trigger a recall election. Wisconsin law does not provide for a referendum on rejecting the collective bargaining law. Unions have targeted state senators who supported the measure and now will turn the heat up on Walker who is also supported by billionaires such as the Koch Brothers and right wingers in the Tea Party.

The recall campaign will be broader than in Ohio and will encompass other actions Walker pushed through including passage of a budget that made deep cuts to public education.

The Ohio vote shows that the public is ready to reject right wing policies that are designed to weaken unions and cut public expenditure.

Phil Neuenfeldt, president of the Wisconsin state AFL-CIO, which represents 250,000 workers in the state said: “It shows that if people come together and work in solidarity and work in unity, they can overcome big money spent against them. I think we started to show that this summer in the Senate recalls and this is further proof this is the model to be used.”

It also gave heart of Democrats and Barak Obama in next years Presidential election.

The result meant humilaition for right wing governor John Kasich, who was supported by the cranks in the Tea Party who are bank-rolling right wing politicians to break unions and introduce legislation to give the right political hedgemony.

Obama was quick to respond through his office, saying: “The president congratulates the people of Ohio for standing up for workers and defeating efforts to strip away collective bargaining rights, and commends the teachers, firefighters, nurses, police officers and other workers who took a stand to defend those rights”.

Harold Schaitberger, president of the International Association of Firefighters, called the vote “an absolute momentum-shifting victory for the labour movement”.

After his humiliation Kasich said: “When you get beat, you got to admit it”. But with a hint of a sting in the tail he said that he would “take some time” and “reflect on what happened”.

But with with 99 per cent of the vote counted, 61 per cent had voted to repeal a law barring more than 350,000 teachers, firefighters, police officers and other government workers from taking industrial action to improve their pay and conditions and took away the right of state employees to negotiate over their pensions, health-care benefits, and scrapped binding arbitration and ended promotions based on length of service.

AFL-CIO president Richard Trumka said: “Ohio sent a message to every politician out there: go in and make war on your employees rather than make jobs with your employees and you do so at your own peril.” Trumka said Ohio workers had had fought back “against lies pushed by shadowy multinational corporations and their anonymous front groups that attempted to scapegoat public-service employees and everyone they serve by assaulting collective bargaining rights.”

He said that Ohioans had “rejected the crazy notion that the 99 per cent – nurses, bridge inspectors, firefighters and social workers – caused the economic collapse, rather than Wall Street.”

The United Steelworkers president Leo Gerard (who will be in the UK this weekend for the first Workers Uniting Congress) said “Active and retired Steelworkers Union members joined their neighbors and all working families to reject the anti-worker Issue 2 on the ballot in support of firefighters, teachers, nurses, bus drivers, bridge inspectors, social workers and other public employees. It was a citizens’ victory for all. We stood together, public and private sector – union and non-union – to start a new direction and declaration to the extremist politicians that Ohio voters reject their agenda. Now we’ve got to prepare for tomorrow’s victories and build a future for an America that works for all of us.”

More from the USW on the Ohio vote here.