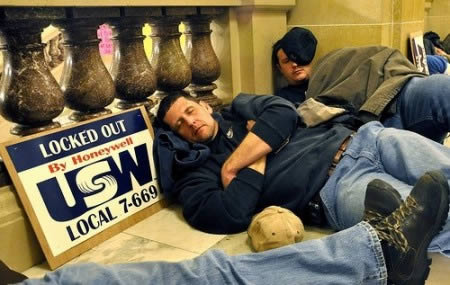 Last Friday, two van loads of United Steelworkers (USW) Local 7-669 members, who have been locked out of the Honeywell uranium facility in Metropolis, Illinois, for nine months, traveled through the night to join the ongoing protest in the Wisconsin State Capitol.

“After all the support we have seen from around the country, it would be a disservice not to join our brothers and sisters in Wisconsin and give some of that support back,” said Darrell Lillie, president of the USW local. “Without collective bargaining rights, workers in both the public and private sector would be devastated and lose their voice in the workplace.”

The 228 union workers in Metropolis have waged what labor historian Joe Burns called the most high-profile labour struggle, as Honeywell’s CEO attempts to bust unions throughout the corporation. They have been at the forefront of defending the right to collective bargaining in the private sector,  facing an adversary in the private sector as ideologically fanatical as Wisconsin Governor Scott Walker – Honeywell CEO David Cote.

Watch this great segment by RT TV’s Lauren Lyster on the struggle at Honeywell:

Like Wisconsin Governor Scott Walker, Cote refuses to sit down and bargain in good faith with workers. Workers originally agreed to continue working under the old contract until a new one could be agreed upon, but this was not good enough for Honeywell CEO David Cote, who locked the workers out in June 2010. Since then Honeywell has been unwilling to negotiate.

Much like Scott Walker, Cote is trying to use the recession to crush the union at Honeywell, claiming he needs to limit the power of the union in order to bring down costs. However, the Honeywell CEO has spent more money keeping workers locked out than giving them what they want in their contract.

According to union officials, Honeywell has already spent or lost at least $48.8 million to keep the workers locked out over a four month period. By contrast, agreeing to workers’ demands that Honeywell maintain their current health and retirement benefits would cost the company only $20 million over the life of a three-year contract.

So far they caused a series of accidents, as outlined in this report “Communities at Risk,” at the uranium plant that could potentially prove deadly for the surrounding communities. A report issued by Nuclear Regulatory Commission last year showed that Honeywell coached scabs on safety tests and helped them to essentially cheat on passing safety tests.

Last year, members of USW Local 9292 at a Honeywell facility located on a military base at Blount Island, Fla., threatened to strike after receiving a poor contract offer. Local 9292 represented approximately 500 employees at Honeywell who service Marine Corps equipment and gear. Some support operations in Iraq, on fleet ships, or National Guard units.

Honeywell managers promptly threatened to bring in Marine Corps troops to do the jobs of union workers if they struck, according to USW Public Affairs Director Gary Hubbard and USW Local 7-669 Press Secretary John Paul Smith. Likewise, Honeywell pulled the security clearance of several of the key union leaders based overseas in an attempt to intimidate them. Workers in combat zones were forced to find and pay for their own way home. Ultimately, as a result of the intimidation, Local 9292 workers decided not to strike.

Unlike the situation with Governor Scott Walker, however, a great deal of political leverage does exist to stop the lockout in Metropolis. David Cote is a close advisor to President Obama. Honeywell is the number one political donor in the United States, having given $3 million dollars to political campaigns in the last election cycle. The CEO has flown with President Obama on state trips to India. Likewise, Honeywell has received $13 billion worth of political contracts since 2000.

As one senior labor leader told me the other week “President Obama could settle the lockout today, if he just picked up the phone and told Cote to settle.”

President Obama has yet to get involved in the fight, despite what he said in Spartanburg, S.C., while campaigning on November 3, 2007: “Understand this. If American workers are being denied their right to organize and collectively bargain, when I’m in the White House, I’ll put on a comfortable pair of shoes myself. I’ll walk on that picket line with you as President of the United States because Americans deserve to know that somebody is standing in their corner.”

The workers aren’t waiting for Obama to walk the picket lines. They are organizing themselves in nearly unprecedented ways. Honeywell has nearly 10,000 unionized workers spread out among more than a dozen facilities throughout the United States as well many unionised employees overseas. Previously there was very little communication between the various unions that represent Honeywell workers.

But earlier this year, union employees organised the first Honeywell Union Council meeting to bring together all the unions. Union leaders from all over the United States (and one from Europe) representing workers at Honeywell facilities converged in Metropolis February 21st and 22nd for the inaugural council meeting. It’s a bold step to counter the massive union busting campaign.

Meanwhile, Cote has hired the notorious Burke Group (no relation!), an outside union-busting firm, whose other high-profile customers have included General Electric, Coca-Cola, T-Mobile and the Chinese Daily News.

“It is with this support of our brothers and sisters all over the world that we last one day longer and win this fight,” said Lillie, the USW local president.

In the depths of the recession, workers at Honeywell and in Wisconsin are realizing they only have each other to rely on—not politicians like Barack Obama. Workers frustrated with a president failing to deliver change are pushing forward, determined to fight for the workplace democracy and standard of living they believe is their due.

Mike Elk is a third-generation union organizer who has worked for the United Electrical, Radio, and Machine Workers; the Campaign for America’s Future, and the Obama-Biden campaign. He has appeared as a commentator on CNN, Fox News, and NPR, and writes frequently for In These Times, Alternet, and Truthout.