Global union IndustriALL says that ‘yellow unions’ and an attempt to undermine the South African National Union of Mineworkers lies behind the slaughter of 35 workers at the Lonmin mine.

Conflict stemming from collusion between management and a ‘yellow union’,  the Association of Mineworkers and Construction Union attempting to weaken South Africa’s National Union of Mineworkers (NUM), escalated into tragedy  as at least 35 workers were shot dead by police at the Marikana platinum mine.

The NUM in calling for calm to return to the Marikana mine, about 100km north-west of Johannesburg, and demanding a full and thorough investigation from law enforcement agencies that leads to arrests and prosecution for those responsible.

The shootings occurred at the Wonderkop squatter camp at the mine, after police efforts to disperse crowds of demonstrators with teargas and water cannons failed.

It is now the responsibility of Lonmin, the UK-based mine owner to ensure calm and safety is restored so that miners can return to work.

The blame and the root cause of the conflict, which had already killed 10 people, lies with the employer who conducted an underhanded attack on the NUM and the established bargaining structure by bypassing the proper channels and offering a unilateral allowance to rock-drill operators.

The NUM General Secretary Frans Baleni and an NUM delegation visted the mine together with South Africa’s Mineral Resources Minister Susan Shabangu, to give condolences to the families of  the dead workers and to establish a clearer understanding of how the tragedy occurred.

NUM President Senzeni Zokwana, also Vice-President of IndustriALL, who is at the mine appealing for calm, stated “rock drillers are always vulnerable to scam artists targeting the platinum industry in Limpopo and the North West.”

Referring to the rival union he said “these guys have taken the guise of a union that promises them R12,500 – which NUM adamantly says is unachievable for a rock driller.”

Lonmin followed the example of fellow platinum miner Impala Platinum, where there has also been increasing intimidation and violence this year.

At both Lonmin and Impala, the NUM is persecuted by management through a number of undermining efforts that favour ‘yellow unions’ and non-union members.

A major contributing  factor a is the lack of a centralized bargaining structure inside the Chamber of Mines for the platinum mining industry, as exists for coal and gold mining. South Africa is the world’s largest producer platinum producer.

IndustriALL Global Union has sent its heartfelt condolences to the families and friends of those killed, and has joined the NUM in calling workers to remain united in face of management attempts at divide and rule.

IndustriALL has condemned the tactics of Lonmin’s local management which is the root cause for this tragedy and called on the Chamber of Mines to address the need for centralised bargaining in the platinum industry to prevent companies from undermining union rights, closing the  space for such unilateral destructive actions for which workers have paid with their lives. 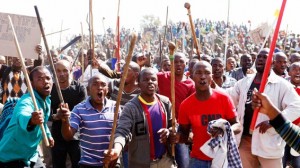 IndustriALL and NUM are demanding that the families of the deceased must be compensated as if the deceased died on duty and all workers must be paid full salaries for the period of work stoppage, as it was the company that could not provide them with transport and security to work.

South Africa’s COSATU (the trade union equivalent of the TUC)  said: “The federation extends its condolences to the families and friends of all those who have lost their lives in this latest violence and reiterates its call for workers to observe maximum discipline and unity in the face of a ruthless attempt to divide and weaken them.”

The group has now convened an urgent meeting between the leadership of the National Union of Mineworkers (NUM) and the ‘Yellow Union’ to address what it calls ” a co-ordinated political strategy to use intimidation and violence in a concerted drive to create breakaway ‘unions’ and divide and weaken the trade union movement”.

Definition of a Yellow Union: A term traditionally used to refer to union organisations set up and supported by the employer or by management to hinder the representation and defence of employees’ interests or to prevent the presence of more combative or demanding trade unions in the enterprise or workplace.