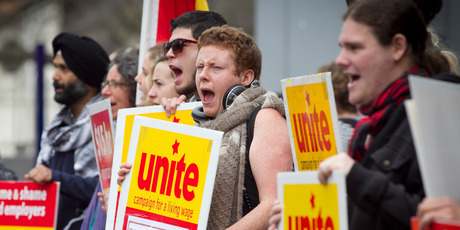 The dispute between the NZ union Unite and fast food giant Burger King appears to have been settled – but the deal why will remain private.

Unite in NZ had put the heat on Burger King in after claims surfaced earlier this month the company was unfairly treating migrant workers and underpaying its staff. It has also claimed that management had assaulted an employee.

However, both parties say they have resolved the dispute with Unite national director Mike Treen saying that he can once again recommend New Zealanders to patronise their stores. The details of the resolution will remain confidential . Treen said the union would be “very pleased with the outcome”.

“In addition the parties will work in good faith to promptly resolve any individual employee cases,” he said.

In the next few days a joint union-company notice will be displayed in every store followed up by a letter to union members explaining the outcome.

Treen said he was  confident that Burger King was committed to building a positive environment and become an employer of choice for its employees.

More news on this settlement can be found by clicking here.

BACKSTORY:
The New Zealand Unite union is claiming fast food giant Burger King has been pressuring its employees to resign from the union.

Unite in NZ protested outside the Burger King store on Auckland’s Queen Street  following reports the company launched a secret campaign to encourage employees to leave the union.

Some workers claim they have come under pressure in various ways to resign union membership, including one employee who was told they would not be promoted if they were associated with the union.

Burger King worker 19 years old Lynette Fray said she was confronted after she joined the union.

“I joined the union and got asked to unsign which I said no. Ever since then I’ve had nothing but trouble.”

“The way they achieved it was through, again, bullying and intimidation,” said Unite Union’s  Mike Treen.

As a result Unite Union has filed legal action against Burger King with the Employment Relations Authority in Auckland.

The union’s statement to the court also accuses the company anti-union practices and of setting progress targets for achieved union resignations.

The union says it is seeking hundreds of thousands of NZ dollars in penalties against the company as well as individual managers and area managers for what it calls breaches of workers’ rights.

Unite Union says Burger King is carrying out an anti-union campaign to cover up the worst examples of exploitation of vulnerable, young and migrant workers at a major employer in this country.