Automation And The Workforce 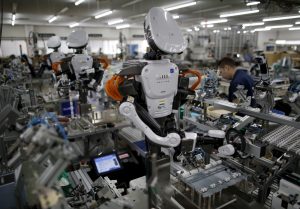 This is a short paper setting out future developments in Robotics/Cobotics and their application in UK industry and services.

Interesting facts: Germany has 176,000 industrial robots compared to the UK with just 17,000 in use; Japanese robot manufacturer FANUC uses production lines that can operate without human assistance for ‘several weeks’; Adidas is planning to open its first automated factory in Germany in 2016; Ocado is trialling a warehouse where robots pack and move good autonomously; SEW-Eurodrive who build power transmission systems with the assiatance of robotic arms that help load machines and pick up componants.

A survey of ‘experts’ found that only 50% beilved this technology would create employment at a similar or faster rate than it displaces them. A study by Frey and Osborne estimated that 35% of UK jobs had a greater than 66% chance of of being automated – the Bank Of England similarly warned that 15 million jobs could be automated over a similar period – but both come with a “health warning” – these figures maybe over estimated as this depsneds on what jobs could actually be automated technoloically rather than economically.

Jobs with the following requirements which it is anticpated will be difficult to automate: social skills; artistic and intellectual; digital skills; perception.

Jobs in transport; sales; logisitcs; and adminsistration were particularly likely to be effected by automation.

A follow up study in changes of employment between 2001 and 2015 shows 800,000 jobs displaced but 3.5 million new jobs created over the same period.

Certainly worth reading in more detail.

Thanks to Joseph Ennis who interviewed me as part of the prepartion of the document.

This entry was posted in Economics, The Digital Economy and Unions, Trade Unions, Unite The Union. Bookmark the permalink.