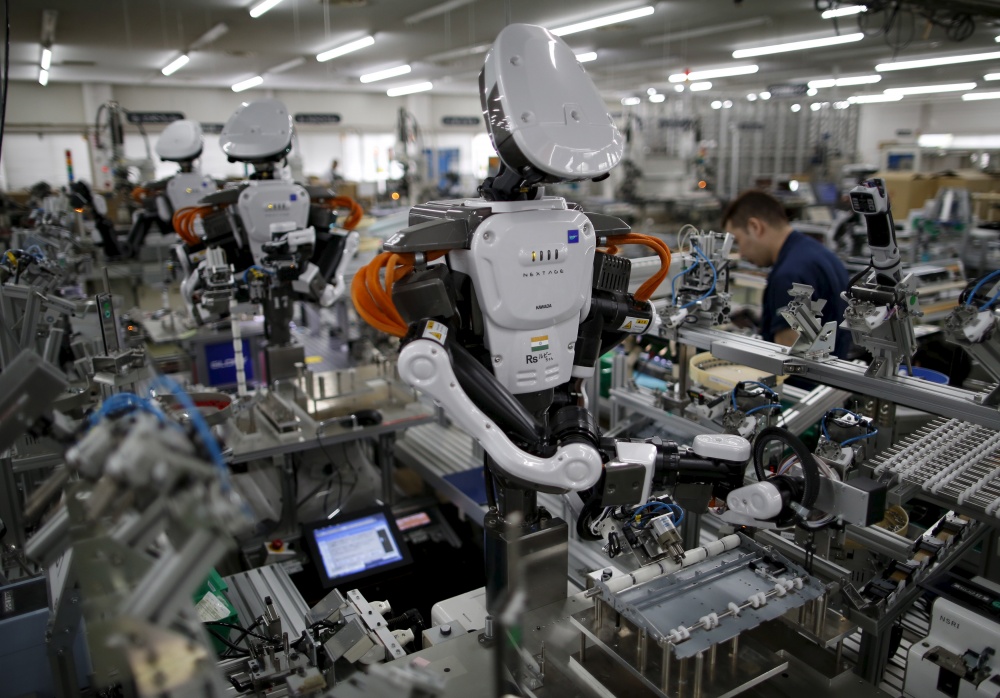 Humanoid robots work with employees on the assembly line at a factory in Japan.

Phrases such as ‘Industry 4.0’, ‘Big Data’ and ‘The Internet Of Things’ are now common currency as the predictions of a new digital world and a new world of work.

The coming digital revolution is a hot topic with employers, the media, academics and unions. All are now looking at how the UK will handle the coming challenges that the new digital age will bring and what the world of work will look like in the next ten years.

In November 2015 Andy Haldane the chief economist at the Bank of England told the TUC that 15 million jobs could be ‘hollowed out’ as digitization and robotics are introduced to the UK’s workforce. He told a TUC conference: “Technology appears to be resulting in faster, wider and deeper degrees of hollowing-out than in the past. Why? Because 20th century machines have substituted not just for manual human tasks, but cognitive ones too. The set of human skills machines could reproduce, at lower cost, has both widened and deepened.”

One well publicised statistic is that iPhone manufacturer, Foxconn, employing 1.2 million workers, says that robots will replace 30% of workers on their production lines in five years.

The fact is that nobody can accurately predict what the coming digital revolution will bring, or the speed of developments, or what sectors of the economy, jobs and world of work in will be affected.

Haldene did point out that the Bank of England studies show that those jobs with a “high creative and technical content,” and those that heavily draw upon “emotional intelligence,” are “the two classes of employment that are most impervious to the rise of robots.”

These predictions of course are not new. In 2013 Oxford Martin School’s report on the impact of future technology attempted to assess the extent of the threat to employment through technological change. It concluded that 45% of jobs in the UK were at ‘high risk’ of being taken over by computers within the next twenty years – in two stages.

First, computers will start replacing people in areas such as transport, logistics, manufacturing production and administrative support. Jobs in services, sales, and construction may also be affected in this first stage.

The report goes onto say that there will be slow down due to bottlenecks in technical areas such engineering. But the prediction is that this will be followed by a second wave of computerization, dependent on artificial intelligence putting jobs in management, science and engineering and the arts at risk.

However, in manufacturing the use of industrial robots in sectors such as automotive manufacturing is well established, digitally connected production is common place and manufacturing companies are already using 3D printing and remote controlled maintenance.

The development inter-connected vehicles is underway with many companies investing millions in R&D in developing autonomous vehicles – Apple are working on a driverless vehicle as are Ford and others.

So what made Andy Haldene’s prediction such big news?

First off – the speed of the growth of the digital and connected world is accelerating. The digital world is already having significant effects on the economy and jobs. 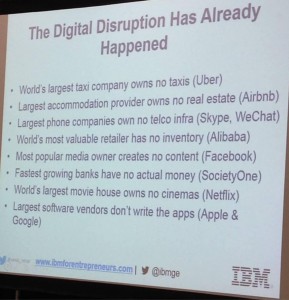 A recent presentation by IBM illustrated the current impact of the digital world – called “The Digital Disruption Has Already Happened” – pointing out that the worlds largest taxi company owns no taxis (Uber); the largest accommodation provider owns no real estate (Airbandb); the largest phone companies own no telco infrastructure (Skye, WeChat); the world’s largest valuable retailer owns no inventory (Alibaba); the world’s most popular media owner creates no content (Facebook); the fastest growing banks have no actual money (Society One); the world’s largest movie house owns no cinema’s (Netflix); the world’s largest software vendor’s don’t write the apps (Apple and Google). Add to that other emerging platforms and you can see what they are getting at.

We could argue we have seen it all before. Remember the dot.com bubble when internet companies were worth billions as investors poured money into them – only to see many of them crash and burn and or get taken over – anyone remember My Space, Boo.Com, Broadcast.com, anyone ever remember their Compuserve number?

The most popular phrase for the digital revolution is Industry 4.0 – based on a simple explanation that Industry 1.0 got it all going in with machines powered by water or steam – creating the industrial revolution; Industry 2.0 developed mass production powered by electricity; Industry 3.0 was driven by the use of electronics and information technology and Industry 4.0 represents the new digital, cyber-physical connected age.

In Germany the IG Metall union (engineering and manufacturing union) is now working on how the new digital age will affect their members and employment structures in a country with employment based on co-determination and tight regulation in the workplace.

The union is examining how workers will adapt and how the union can organise ‘click workers’ or ‘cloud workers’ who will be outside of the their normal structures.

They are looking at (among other things) how to deal with the new flexible working patterns; the replacement of human work; 3D Printing; the extended use of cloud computing and crowd sourcing; computer based support for decision making; paperless logistics and the optimization of production using ‘big data’.

Equally they highlighting the dangers of the digital revolution of creating more precarious work; a race to the bottom in social standards; the elimination work through the use of robotics and the monitoring of behavior patterns and performance and individual flexibility – what IG Metall described as the ‘dark side’.

In order to get ahead of the game the German Federation Of Industries, IG Metall and the Government developed – in 2014 – an alliance dubbed ‘The Future Of Industry’. Each side has their own concerns. The employers say industry is facing a fourth industrial revolution, driven by the Internet, allowing for the physical and virtual worlds to merge. They want Germany to be ahead of the game.

IG Metall says the technology must not control people. “Every second job is at risk and is putting employment, skills, training, flexible working and organizing new workers at the top of the agenda”.

The group has begun its work and working groups are now developing a ‘consistent agenda of medium and long term prospects for industries future’.

The global union IndustriALL which covers manufacturing produced an interesting peice on Industry 4.0 which contains quotes from IG Metall official Christian Brunkhorst on the effect it will have on the German automotive industry. Click here to read it.

So what about the UK? The Government began a consultation in December last year asking for ideas and comment – with lots of stuff about “setting the digital agenda” and the ‘smartphone state”. 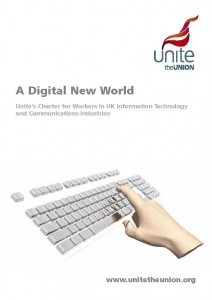 Unite submitted its own document drawn up by members working in the IT sector and called ‘A Digital New World’ which set out what unions need to be demanding from the digital revolution – skills; training and re-training to make sure low skilled workers do not lose out; avoiding the race to the bottom, decent employment rights.

As in German unions will have to reach out and organize ‘click workers’ and workers who will have already adapted to new patterns and forms of work including flexible working patterns, self-employment or project workers.

Unions’ bargaining agenda’s will have to include employment protection, working hours and patterns, skills and retraining opportunites.

There will be massive impact on employment, working conditions, rights at work and on trade unions. We must not miss the opportunity to influence the way the digital revolution will effect workers and the future of work.