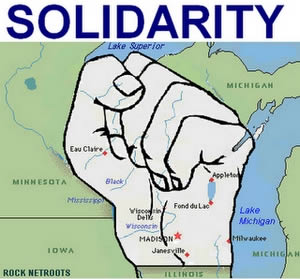 With this website’s server being down for a couple of days it has not been possible to keep upto date with the battle in Wisconsin over workers rights and the right wing Governor Scott Walker who has scrapped collective bargaining rights for public sector workers. Here’s an excellent article by Patti Wenzel of  the website Third Coast Update which helps us catch up with whats going down in Wisconsin.

If you thought the battle of Wisconsin Act 10 was over when the Wisconsin Supreme Court ruled that the legislature had not violated the state’s open meetings law, then you haven’t been paying attention.

That lawsuit was just the opening salvo in the union and Democrats’ attempts to overturn the legislation and save collective bargaining for the majority of public employees in the state.

Suing on the basis that the Joint Committee of Conference violated the public’s right to notice and access to a March 9th meeting was a long shot – the Legislature always had their own rules and separation of powers card to play – but the the suit went forward and has now played itself out.

The only thing left is arguing whether the bill is already law since the Legislative Reference Bureau published it in late March or because the 10-day publish deadline has past. Secretary of State Doug LaFollette says the bill, which was signed by Gov. Scott Walker on March 11, will not be valid until he publishes it in the state’s paper of record. He set that publication date for June 28th.

But Democrats, union leaders and protesters have played their next card (one they had in their back-pocket all along) – a lawsuit filed in the Western Wisconsin District Federal Court.

Their claim is simple:  that Wisconsin Act 10 violates the First and Fourteenth amendments of the U.S. Constitution by creating separate classes of public employees and blocking employees rights to assemble in groups for political speech.

A number of unions representing teachers, public employees and law enforcement officers not exempted from the collective bargaining restraints in Act 10 filed a complaint with the court on May 15. They name the governor, the Secretary of Administration Mike Huebsch and four other state officials in charge of employee relations as defendants in the suit and ask the federal court to issue a declaratory judgement that the act violates the constitution and order a temporary and/or permanent injunction blocking the legislation from enactment.

The filing refers to Walker’s attempts to “eliminate or reduce to a shell the existing collective bargaining rights of a disfavored class of state and municipal workers, while maintaining the robust bargaining rights of a favored class.” It also claims that Walker is making it difficult for the “disfavored class” to retain their unions through the annual recertification vote requirement or the ability to raise funds by eliminating the state’s role in collecting union dues to continue activities, including their “First Amendment-protected political speech activities.”

The lawsuit claims Walker has created a “Public Safety” class of employees – made up of police and fire fighters whose unions supported the governor’s election. There are other state employees who work in fields that would traditionally be considered law or fire positions who are not included in the “Public Safety” class, including UW Police, Wisconsin Capitol Police, conservation wardens, state probation and parole officers, special criminal investigators for the state’s Department of Justice and 16 other job classifications found in the state statutes.

“Not only have Scott Walker and his deep-pocketed corporate allies sought to silence the voices of Wisconsin workers, they have also violated those workers’ constitutional rights,” said Phil Neuenfeldt, Wisconsin State AFL-CIO. “Scott Walker has created two classes of public sector workers and that is unconstitutional. When a legislature discriminates among classes of workers, especially when doing so has more to do with political payback than with any legitimate reasoning, the law has been violated.”

The unions claim the creation of two classes of employees violates the Equal Protection Clause of the Fourteenth Amendment and that the employees in the unfavored or “general class” are being punished for being political opponents of the governor. The suit also claims that reclassification of employees has nothing to do with the stated purpose of Act 10, which was to “balance the state budget and give government the tools [it needs] to manage during economic crisis.”

One of the examples cited in the lawsuit with regards to  Walker’s alleged union-busting agenda is a note entitled “Alternative Approach to Collective Bargaining,” included with the drafting records for Act 10. The note reads that the act will “carve out a new bargaining unit from WLEA (Wisconsin Law Enforcement Association) for the State Trooper.”   The WLEA did not endorse Walker in the 2010 election, while the lobbying group from the troopers did.

The lawsuit concludes with the union’s summary of Act 10′s violations, that the 14th Amendment forbids legislation that creates classifications of employees to disadvantage those out of political favor and that the First Amendment forbids the state from adopting a viewpoint-based classification to distinguish between unions that can use state automatic dues collections.

Can the unions win this one? It’s possible with the right judge, but there is precedent for different bargaining privileges for public employees.

Plus, Act 10 doesn’t bar public employees from from forming unions or collecting dues; it just bars the state from collecting the dues or requiring fair-trade collections from non-union members. And it doesn’t tell any of the public unions that they can no longer engage in political speech. It does make that more difficult, but doesn’t outlaw it.

So will this lawsuit stop Act 10 from becoming law?  It will probably stall the implementation, just as the open meetings lawsuit stalled the law for three months at the state level. But if the union loses and decides to take this all the way to the U.S. Supreme Court, it may run into the same wall they did in Wisconsin – a court that leans to the right.