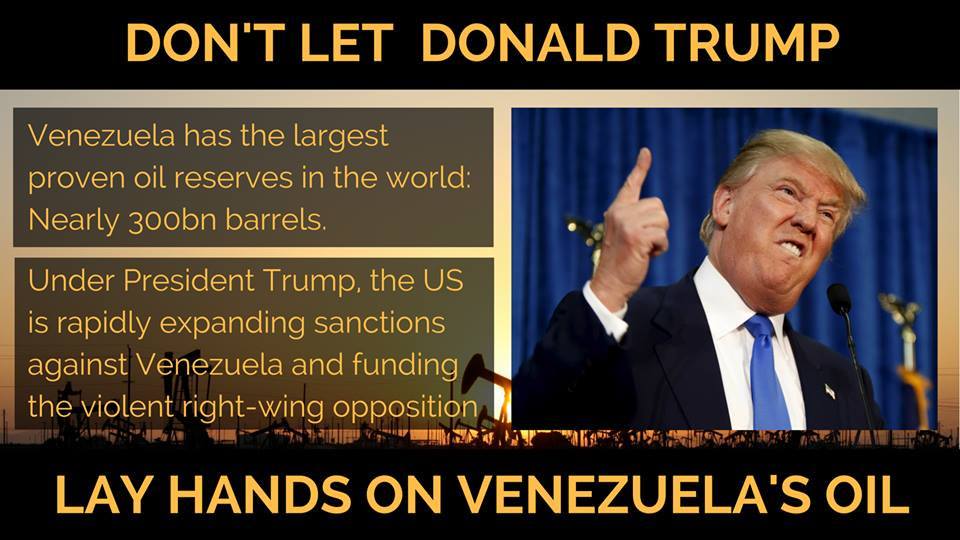 Presidential elections will be held in Venezuela on 20th May. Venezuela Solidarity Campaign has produced a short executive summary of an earlier Q&A document outlining the truth about the vote and rebutting some key myths and misrepresentations peddled by Trump and some parts of the UK media.

The current President, Nicolás Maduro, is standing for the Great Patriotic Pole alliance, along with four opposition candidates:
Henri Falcón for the Progressive Advance (AP), Movement for Socialism (MAS) and the Copei (Social Christian) parties. Falcón is a former Mayor and regional governor. Originally a government supporter, he joined the right-wing opposition in 2012.  He twice backed Henrique Capriles as presidential candidate, against Hugo Chávez in 2012 and against Nicolás Maduro in the last presidential election.
Javier Bertucci, of Hope for Change and leader of the Maranatha Pentecostal Church.
Alejandro Ratti, an independent candidate and an evangelical pastor.
Reinaldo Quijada for Popular Political Unity, who claims to oppose Maduro but not the revolution.

How many parties are participating in the elections?
Seventeen political parties are participating in total in all the elections that are taking place in May.
Absent from the contest due to their own decision is any formal candidate from the coalition of right-wing opposition parties known as MUD (Democratic Unity Roundtable) who have decided not to stand. The MUD has expelled Henri Falcón from its ranks after he registered with national electoral authorities as a presidential candidate, and is currently boycotting the elections, but it has been reported that a number of MUD-supporting individuals and organisations are breaking ranks and actively backing Falcón.
This is not a unique development. Some right-wing opposition parties have boycotted previous elections in Venezuela when they are likely to lose, including the 2005 parliamentary elections for example.

Are opposition parties barred from standing?
Some western media have reported opposition parties being banned in Venezuela, but this is simply untrue. What is the case is that historically in Venezuela parties are required to register and meet a set of basic requirements to run in an election. This is also common practice internationally.
To apply to run in an election, a party needs to show it has the support of at least 0.5% of voters in 12 out of Venezuela’s 24 states (Law of Political Parties, Public Meetings and Demonstrations, Chapter II, Article 10). The validation process is not onerous, compared for example with Florida’s requirement of support from 5% of registered voters. Other countries (e.g. Germany and Estonia) also have electoral law provisions for parties losing their right to contest an election for non-participation.

Who oversees elections in Venezuela and how does voting take place?
The National Electoral Council (CNE) oversees elections. This non-partisan body is responsible for all aspects of the electoral process, including the date, registering voters, facilitating and monitoring campaigns, organising voting equipment and auditing the vote together with party representatives.
Contrary to claims Venezuela is a dictatorship, these elections will be the 25th national election or referendum since 1998, more than any other comparable country. Elections in Venezuela are routinely and widely audited and a number of measures are in place to ensure against fraudulent behaviour. Each polling station has a number of stand-alone DRE voting machines. Each citizen is identified by their fingerprints. The touch-screen voting machine, activated only if the fingerprint matches the voter’s ID on the database, provides a printed receipt that is checked by the voter before being placed in the ballot box.
This rigorous system prevents fraudulent behaviour, such as double voting or identity theft, and provides an audit trail to check the results. Since there are two records of every vote it is virtually impossible to stuff or destroy ballot boxes without producing a mismatch between manual and electronic counts.
After the poll closes, the total number of votes cast is checked for consistency with the paper record, the machines are connected to the network to count the votes for each candidate, and a number of machines are selected at random for a 54% audit of both paper and electronic results at each polling station. Finally, an audit report is produced and signed by staff and observers, officially sealed and handed to the military for delivery to the CNE, with copies to the two candidates with the highest number of votes.
Fifteen audits have been scheduled for the May 20th presidential election.
Venezuela’s rigorous systems of registration, voting and auditing elections has been praised by observers, with Nobel prize-winner former President Jimmy Carter describing it in 2012 as “the best in the world”

Are there any additional safeguarding arrangements being made for these elections?
As well as the usual protocols for conducting elections, discussions between the CNE and all presidential candidates have resulted in agreeing additional guarantees for this vote. These include that the CNE:
* re-opened the electoral register for further voter registration
* has agreed to safeguard equal access to media
* agreed that voting centres which had been relocated following violent outbreaks in 2017’s Constituent Assembly elections are to be moved back to their original location
* will keep political party kiosks 200m away from voting centres to avoid voter intimidation or pressurising.

Will Venezuela’s elections be internationally observed?
The CNE has committed to creating a delegation to observe “all phases of the electoral process” with participants from United Nations and “other mutually agreed upon international bodies and organisations”.
A delegation of Samuel Moncada, Venezuela’s UN ambassador, and Henri Falcón jointly requested the UN send a mission to observe. President Maduro has also invited the EU to send a delegation to observe the elections. Former Spanish Prime Minister Jose Luis Rodriguez Zapatero, who recently mediated the talks between the Venezuelan government and MUD, has confirmed he will observe the process.
Venezuelan elections are normally monitored by as many as 150 international observers, drawn since 1998 from organisations such as the Union of South American Nations (UNASUR), the Carter Centre, the Latin American Council of Electoral Experts (CEELA) and the Inter American Union of Electoral Councils (UNIORE).

What is the United States’ position on the Presidential election in Venezuela?
This has altered substantially in the last year. From March to June 2017 the State Department called for immediate elections. However, after government successes in elections last year, the US position changed. When these elections were announced, the State Department declared the contest was illegitimate and its results would not be recognised. It has been reported they threatened to sanction Henri Falcón for running.
The US appears to have abandoned belief in the right-wing opposition being able to win electorally, instead favouring ‘regime change’ through military means or by facilitating the conditions for a coup. In line with this, the Trump administration is considering even more drastic measures than the existing severe economic sanctions in place against Venezuela.

This entry was posted in International Trade Unions, Politics. Bookmark the permalink.