US Steelworkers tell Clinton not to implement FTA with Columbia 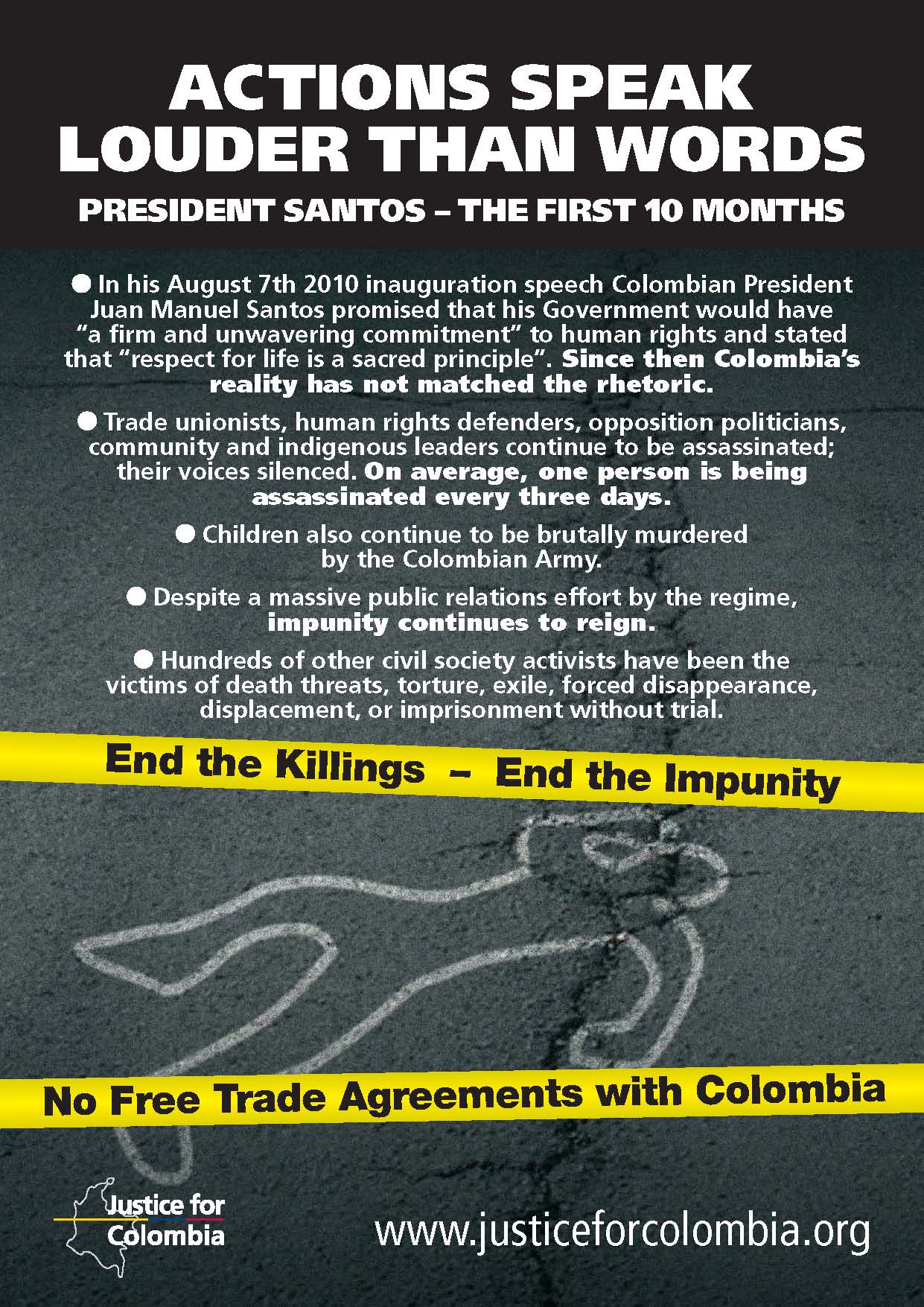 The United Steelworkers have sent US Secretary Of State Hillary Clinton an “emergency alert” warning her that Colombian trade unionists are under an “elevated threat” after Washington approved a free trade deal between the two countries.

The letter follows a warning by Colombia’s largest workers union CUT that the number of threats against labour rights activists increased this year.

“In 2010 there were 307 threats and so far this year there have been 251,” the Colombian labour union said on its website.

According to the USW, 23 unionists have been killed so far this year, 15 after the April signing of a bilateral treaty in which Colombia compromises itself to improve the protection of labour rights workers.

Both the USW and the CUT said a letter received by the Colombian labour union on October 17th – four days after the U.S. Congress approved the FTA – in which, according to the Steelworkers, neo-paramilitary group Aguilas Negras (an organised crime gang – The Black Eagles) announced its intention to “declare war against all” Colombian trade unions. Three of the union’s leaders were explicitly named the “next military target” of the neo-paramilitary group.

“We would like to remind you that when given the first opportunity we will take any of you out of the way. As you already know we are already recognized as terrorists worldwide and we are not afraid to do this work now that we count on the support of large criminal groups like the Paisas, the Rastrojos, the Aguilas Negras etc.,” part of the letter published by the CUT said.

“We urge the Administration to call upon the Colombian government to take all measures to protect the members and leaders of the CUT, but especially the three individuals singled out by The Black Eagles,” Steelworkers International President Leo W. Gerard said in a press statement.

The Steelworkers made public, details from the communiqué of the The Black Eagles and named the union leaders the communique said would be assassinated.

Leo Gerard went onto say: “The reality on the ground in Colombia has not changed since the free trade agreement was approved by Congress against strong opposition by labor and human rights groups. A record 51 unionists were killed in Colombia last year. Since 1986, only five percent of more than 2,800 union killings have been prosecuted, making impunity the standard for justice in the killings. This year alone, 23 unionists have been killed in Colombia – 15 of those were since the U.S. negotiated Action Plan in April.

According to Leo Gerard, the FTA “should not be implemented until Colombia fully complies with key elements of the deal providing protection to workers and improving the prosecution of perpetrators of crimes committed against unionists.”

U.S. unions have rejected a free trade pact with Colombia citing a fear for job losses among American workers and Colombia’s labour rights situation as their primary reason.

U.S. President Barack Obama has said that the FTA will not take effect until Colombia has improved “key elements” agreed upon in the Labour Action Plan that seeks better protection against violence and threats and an improved prosecution of those suspected of having carried out threats against Colombian unionists.

The European Union has signed a free trade agreement with Columbia, but there is a major campaign by unions in the UK, the European trade union federations and the ETUC to stop the implementation of the FTA. In the UK unions affiliated to the Labour Party have campaigned to oppose the signing of any FTA with Columbia.