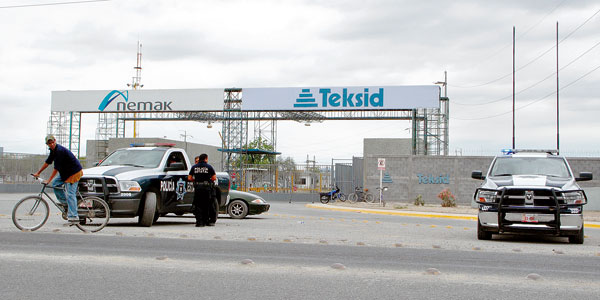 Cops guard the entrance to the Teksid plant in Mexico after workers downed tools.

Workers at the Teksid Hierro plant in Mexico have continued to strike against the imposition of the yellow, stooge union, CTM by the company at the foundry. They stopped work again on April 20th after three workers were sacked. Workers now say the shut-down will be permanent.

Teksid is part of the part of Fiat Chrysler Group.

600 signatures have been obtained in support of affiliating to Los Mineros the Mexican metals and mining union.

The leader of the National Executive Committee of Los Mineros, Tomás Hernández Castillo said that the Teksid Hierro plant does not operate on Sundays, so it will be April 21st when the workers strikers decide the next steps.

Reports are that hundreds of workers came to the factory but did not go in to work.

“People are organizing a makeshift camp in front of the factory with supplies of water and food, and reiterate that they don’t want to hear anything more about the CTM ,” Castillo added.

The yellow union CTM leader Mario Dante Galindo ordered the Teksid workers to return to work. “People must understand that there are rules everywhere, there is a legal and fiscal order. We have done things the right way,” he said, referring to the CTM. A commission of those people who thought the stoppage was correct was set up, and then the Labor Prosecutor ruled that the stoppage  illegal.”

Marisol Ruiz Moreno, Orlando Mendoza Guardiola and Oscar Arturo Rodriguez Ponce, the three workers were  dismissed by Teksid on April 18th said that their dismissals were in retaliation to the work stoppage held the previous week to demand profit-sharing payments and reject the CTM in favour of Los Mineros.

Imelda Jimenez Mendoza, who served as spokesperson for the workers at the beginning of the strike yesterday, said Ruiz, Mendoza and Rodriguez were part of the commission of nine workers who had approached company officials to discuss their complaints and that they were fired despite the company’s pledge that there would be no retaliation.

With regard to her dismissal, Ruiz Moreno said company representatives told her she was fired for distributing affiliation forms for Los Mineros in the workplace. However, while acknowledging that she had the affiliation forms with her, insisted that they were being distributed outside the factory, in front of the plant.

She also charged that security personnel had kept her locked in a room waiting for a meeting with Carlos Blackaller, Superintendent of Human Resources, who questioned her about the change in union before ordering her escorted out of the plant.

Workers also complain about the lack of safety in the plant, as several accidents have occurred that have not been addressed properly by the company.

The overwhelming majority of the strikers have said that they want to be represented by Los Mineros, led by Napoleon Gomez Urrutia “because it is modern, honest, democratic and especially identified with union workers and their families.”

More updates as we get them.