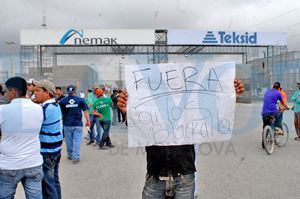 Talks have begun at the strike hit Teksid Hierro plant in Mexico between Los Mineros and the company (owned by the multi-national Fiat-Chrysler Corporation).

During a second round of talks with leaders of Los Mineros, the multi-national company agreed to the Teksid Hierro workers demands to reinstate three of their colleagues sacked in retaliation for striking, pay a fair share of the profits and respect the decision to join Los Minero’s – the independent mine and metal workers union rather than the company supported ‘yellow union’ CTM  – with only the issue of back wages for the work stoppage outstanding.

Tomas Hernandez Castillo of Los Mineros reported ‘satisfactory progress’ in the negotiations, which were attended by senior company representatives.

Also present were the Local Board of Conciliation and Arbitration and a commission of eight Teksid workers.

He said that managers had talked with senior executives of Teksid in Brazil and agreed to the proposals of the workers, except for the payment of wages lost for the time of the work stoppage on 19th April, to the time of the negotiations on Tuesday afternoon.

In regard to the workers’ demands for union recognition of the independent Los Mineros, Hernandez said that this point is already approved by the company, who said it will not interfere, given that nearly all of the workers had signed affiliation forms to join the Mineros – almost all the 800 workers in the plant, as witnessed by the Local Conciliation and Arbitration Board.

Hernández said that the demand to cease repressive measures and make a fair distribution of profit sharing had also been approved by the company.

There are 1,100 workers at Teksid including contract and administrative employees, among them 800 unionised workers in the areas of Cores, Molds, Finishing, Shipping, Finishing and Shipping.

Teksid Hierro fabricates heads and mono-blocks for the automotive industry.

These moves followed attacks on Teksid strike leaders who were assaulted by ‘hired thugs’ while coming out of a meeting with management and labour authorities on 21st April.

Reports say between 80 and 100 assailants surrounded the Teksid workers, insulted and attacked them with kicks, punches and sticks and iron pipes, constantly threatening them to abandon their protest movement for decent pay and their demand to affiliate with Los Mineros. Among the attackers were allegedly people from the local CTM union.

For background on the Teksid strike click on the link above.