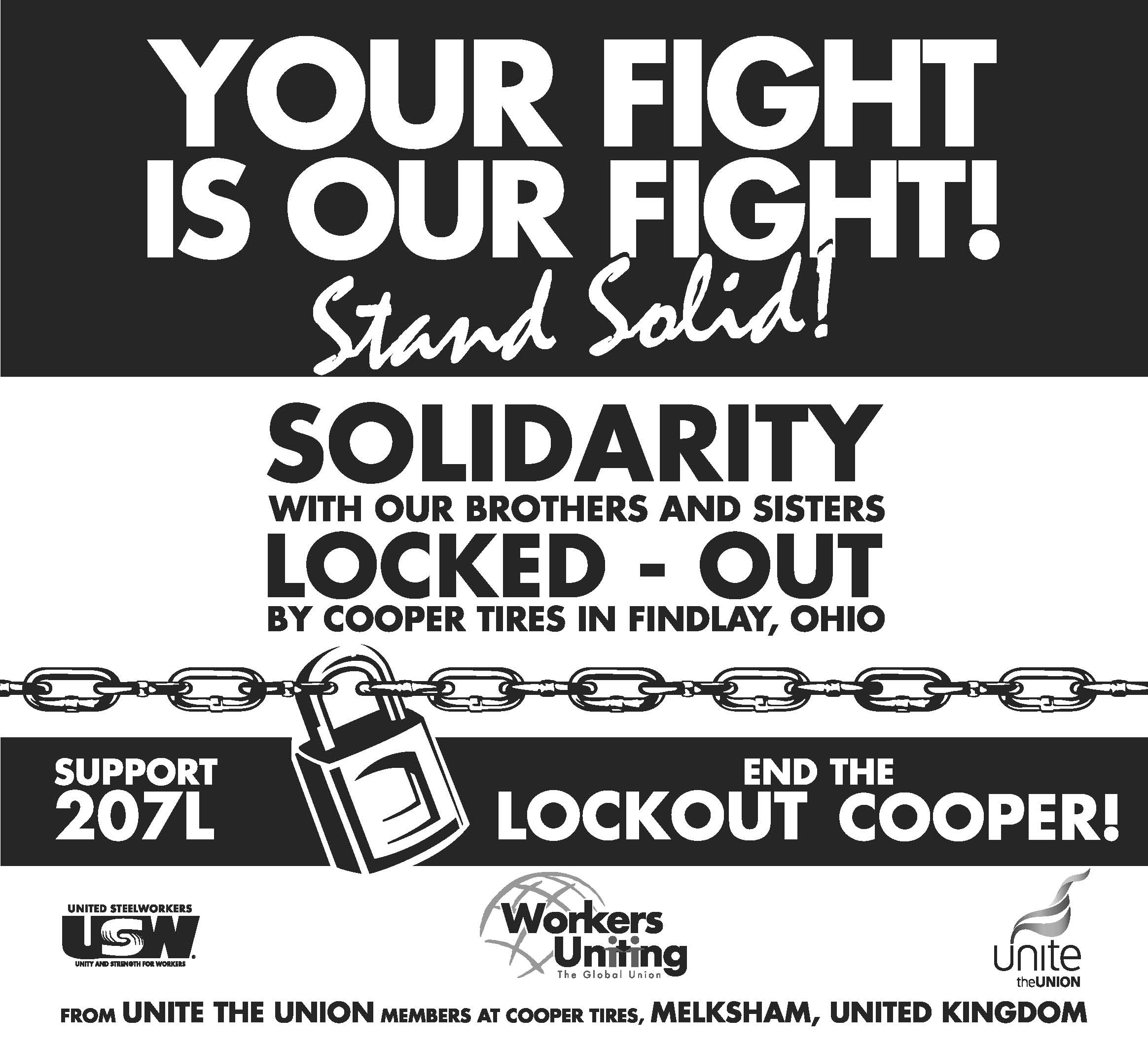 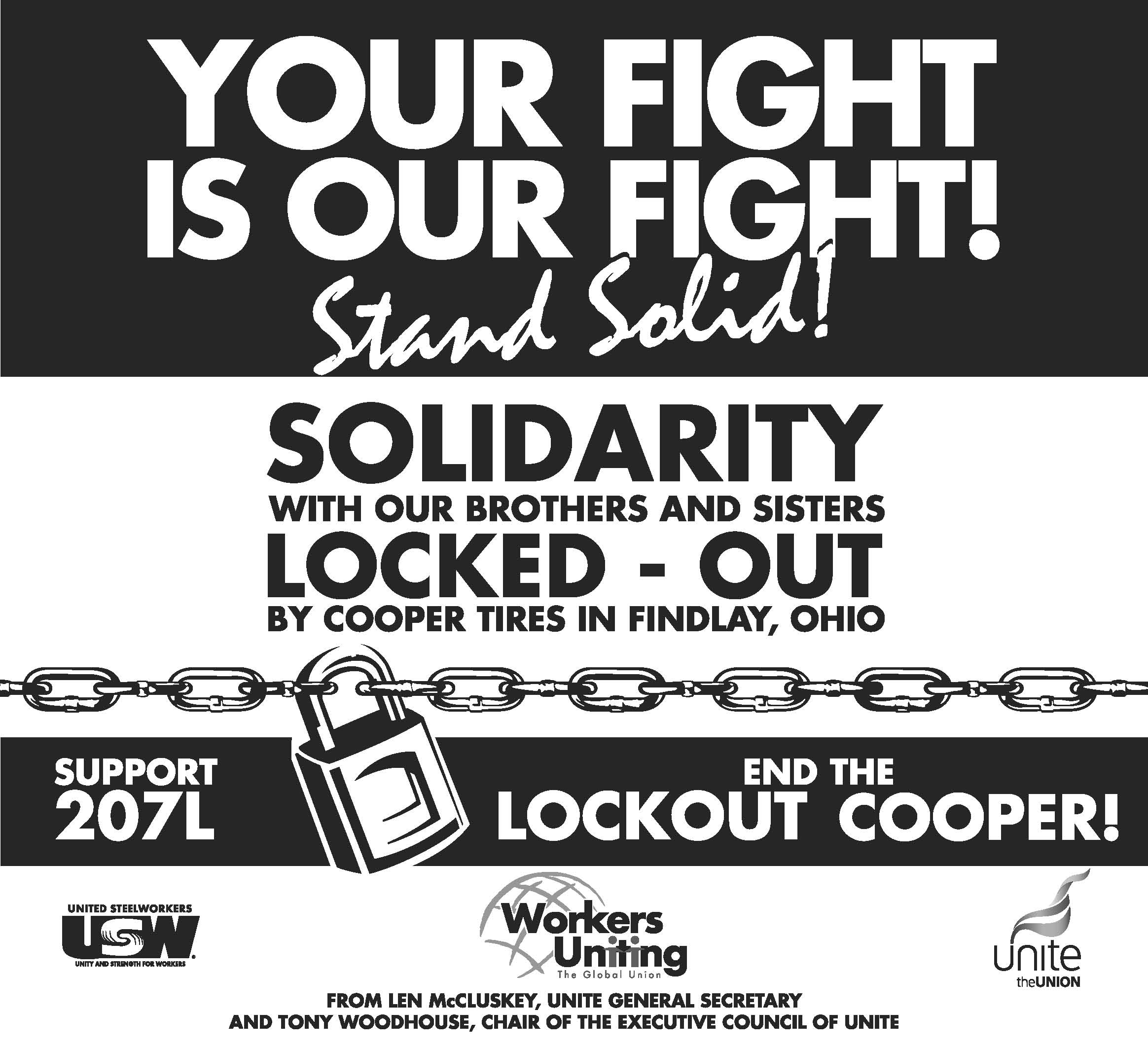 Thousands of trade unionists joined the United Steelworkers (USW) at a solidarity rally to support 1,051 members of USW Local 207L who have been locked out of their jobs at Cooper Tire and Rubber Co. since November 28th, 2011, when the company refused the union’s offer to remain on the job while negotiations proceeded. 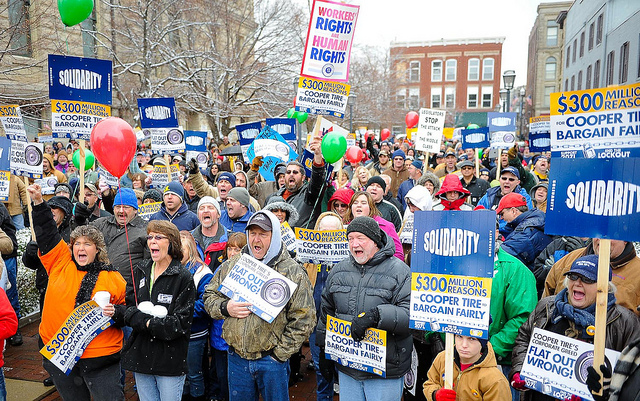 “Management at Cooper Tire needs to stop holding our jobs and this community hostage, end this unfair lockout, join us at the table and bargain in good faith,” said USW Secretary-Treasurer Stan Johnson, who heads the USW’s tire industry bargaining. “The word is out. The unions which represent Cooper Tire facilities around the world are standing with us today.” 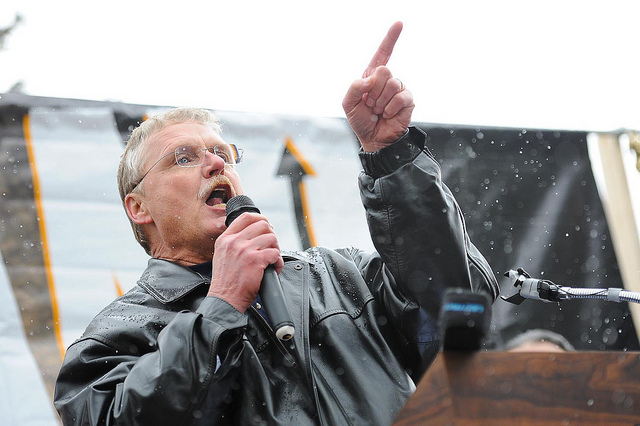 Johnson said that Nezavisnost, the Serbian union which represents workers at Cooper’s recently purchased overseas facility, has already demanded that the company end the lockout and pledged support and resources to bring that about; along with Unite the Union, representing workers at Cooper’s Melksham, U.K. plant which has already been distributing USW-provided literature to its members.

Johnson said that he is proud of the members of Local 207L for standing together during this difficult time and that having the support of our families and friends in the community is essential, especially during the holiday season. 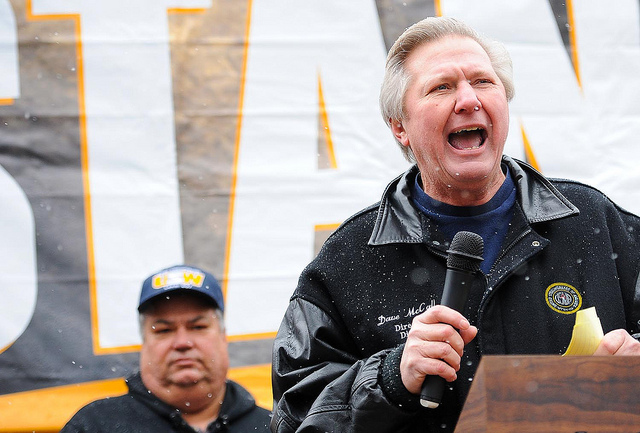 “Our union knows its strength lies in numbers and the power of unity,” said USW District 1 Director Dave McCall. “Today’s crowd will disperse after the rally, but our strength will continue to grow when people carry the messages and spirit of solidarity with them to share wherever they go.”

McCall said that the union will continue to ramp up pressure to bring Cooper back to the table to negotiate a fair contract in Findlay.

“Cooper Tire’s outrageous, unnecessary and unprovoked attack on the loyal, productive and highly skilled workers in Findlay within days of the Thanksgiving holiday speaks for itself,” Burga said. “The Ohio AFL-CIO shares in your disgust and will continue to stand and fight with the USW in Findlay until justice is restored.”

USW Local 207L President Rodney Nelson said on behalf of the local union officers and negotiating committee that all the members of Local 207L are thankful for the generosity of the community and welcome any challenge ahead with its continued support.

“We are the community,” he said. “Cooper hasn’t been fair with us at the bargaining table. While the company tries to mislead, confuse and divide people, we stand simply for truth, unity and fairness.”

Nelson said that the current management has lost touch with the principles that built Cooper in Findlay and lack respect for the history of the company in Findlay and the surrounding areas. 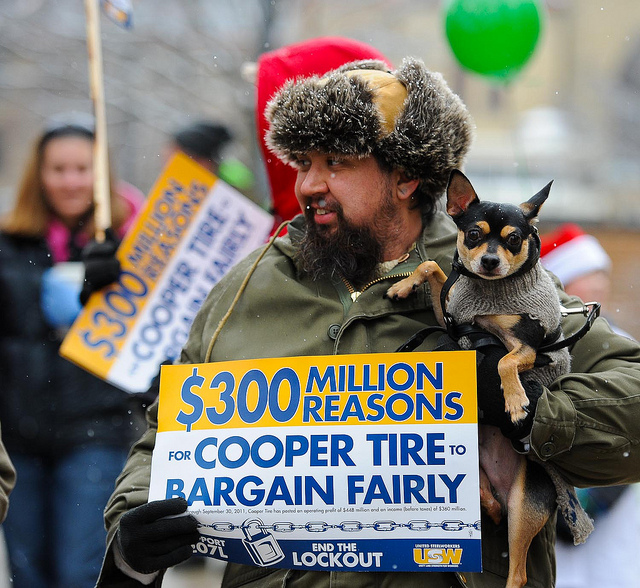 One man and his dog at the Cooper Tire Demo, Findlay, Ohio

The descendants of Cooper founders Claude Hart and John Schaefer, in fact, expressed their support for the locked-out members of USW Local 207L in a letter to The Courier, which they were kind enough to share with the USW.

“Locking out employees who helped the company during hard times and hiring scab workers to replace them subverts the purpose of collective bargaining, is contrary to good faith practices and is un-American at the core,” they wrote.

Unite has taken out adverts in the US press (see above) expressing its support and solidarity for the Steelworkers members. Unite represents workers at the Cooper Tire plant in Melksham, Wiltshire, where staff have distributed leaflets and posters with details of the lock-out as well as sending messages of support and solidarity to United Steelworkers manning the picket line in Ohio.

Commenting on the support of Unite and its members at Melksham Unite Assistant General Secretary Tony Burke said: “Manufacturing is now globalised and what happens in one country can happen in another. That’s why Unite and our members at Cooper Tire are standing up for our US brothers and sisters.

“Cooper Tire is a global corporation and the workers helped it out when it was in trouble by accepting pay freezes for many years. Now the company repays them by locking out its 1,000 strong workforce. We can’t stand idly by and watch this happen.”

Here is a link <http://www.flickr.com/photos/unitedsteelworkers/sets/72157628473394823/> to an online gallery featuring images from Saturdays rally in support of locked out USW local 207L members.