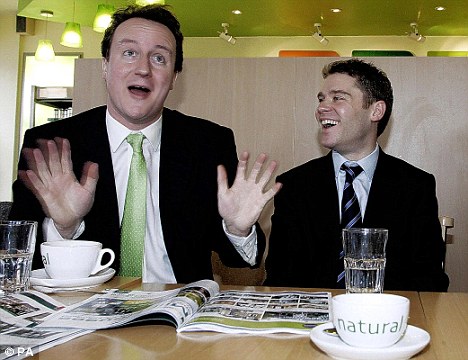 Tory MP Aiden Burley, chairman of the anti-union Trade Union Reform Campaign has been sacked for offensive behavior after attending a stag party in France where guests dressed as Nazis.

One of  Burley’s upper class chums donned a replica SS officer’s uniform and another guest reportedly toasted the “ideology and thought processes” of Adolf Hitler’s regime, as well as abusing guests and staff at a restraunt in a French ski resort.

Burley had limply expressed via Twitter his “deep regret” at the “inappropriate” actions of guests, including toasts to the Third Reich. The move came when a UK Sunday newspaper said it had “new information about the episode”. This included an allegation that Burley had been the ‘driving force’ behind the SS officer’s outfit and paid for its hire.

The stag party, in the ski resort of Val Thorens in France, was arranged to mark the marriage of Oxford graduate Mark Fournier, 34. Burley agreed to stay away from the wedding, which was due to take place on December 17th.

Burley faced intense criticism from Labour MPs and groups including the Board of Deputies of British Jews after film of the event showed him raising a glass moments before offensive toasts were made.

One of the toff’s was heard describing Burley as ‘the candidate for Berlin East’ while Fournier paraded around in his SS uniform. In France, it is a crime to wear or exhibit in public anything reminiscent of the Nazi era, except in the context of a film, play or historical exhibition.

Burley was removed from his post as Parliamentary Private Secretary at the Department for Transport.  A Government spokesperson said: “In light of information received the Prime Minister has asked for a fuller investigation into the matter to be set up and to report to him”.

The links between Cameron and Burley. However, having thrown Burley overboard it is important to remember the background to the TURC and Cameron’s endorsement of its activities. Cameron threw his support behind the group which is attacking trade union facilities time in Government departments and public bodies – negotiated time off for trade union work, freely entered into by departments and bodies with unions.

Cameron wrote to  Burley saying: “I strongly believe the current level of public subsidy to the trade unions cannot be sustained, either morally or economically.”

He said: “At a time when across the private and public sectors, people are having to take very difficult decisions in order to save money, it is difficult to justify some people in the public sector being not to do the job they are employed for, but instead to undertake full trade union activities – much of which should be funded by the unions themselves.”

Burley’s group said that public bodies should not pay for time spent by employees on trade union activity and that they should charge “commercial rates for trade union usage of facilities”.

TURC is also calling for public bodies not to be “involved in the collection of trade union dues” and for the regular publication of “all public money, resources, paid and unpaid time off given over to trade unions” by officials and civil servants.