Unions Furious As Obama Gets Approval For ‘Fast Track’ 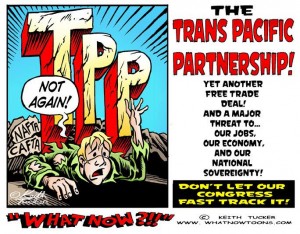 President Obama may have got his way on ‘fast track’, the legislation he needs to drive through approval of a new generation of free trade agreements but US unions have vowed to continue to fight on against the deals.

The US Senate voted 62-37 on May 22nd to cut short debate on ‘Fast Track’ allowing him to drive through new trade deals without line-by-line scrutiny by US lawmakers a victory for Obama and Republicans in Congress.

The vote marked a defeat for Democrat senator Elizabeth Warren who had clashed with Obama in recent weeks criticising the secrecy of trade negotiations as well as the lack of guaranteed labour rights in the trade deals.

US unions are furious. Leo Gerard, president of the United Steelworkers said: “Senators who voted to stifle debate and approve fast track so quickly have undermined rights of working Americans. With less than one full day of debate, and refusing to consider hundreds of important amendments, the Senate essentially took a big step to provide this and future presidents with the authority to negotiate trade agreements any way they choose. In addition, Congress abdicated its responsibility to fully engage in the process.

“Republicans in so many areas have criticised the President but, when it comes to trade, the majority of them are beholden to corporate backers who are salivating at the prospect of increased profits at the expense of workers here in America and around the globe.

“Trade deals like NAFTA (the previous North American Treaty) have constricted economic growth, contributing to stagnating and declining wages, while fueling off shoring and outsourcing of production. All of this contributes to our country’s rising income inequality. But, rather than fully debate those issues and provide effective measures to reform and update our trade policies, the Republican-led Senate shoved fast track through the Senate.

“Unfortunately, a handful of Democrats joined with Republicans in this effort. The majority of their Democratic colleagues voted on behalf of U.S. workers. Those who voted for cloture and for final passage fully share the blame.

“The approach taken by the Senate will damage U.S. production and jobs. No one voting for fast track should laud this bill. More than 150 objectives were included in fast track, but the administration has already said that they do not intend to pursue all of them. Senators who voted yes may try and take cover behind the lofty rhetoric, but the substance gives them nowhere to hide. Workers want good jobs and wages, not more false promises”. 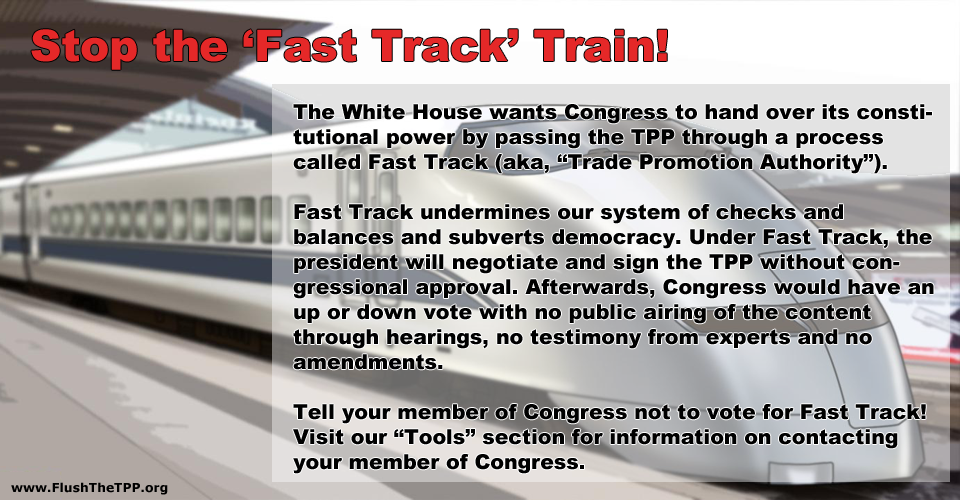 Jimmy Hoffa President of the Teamasters union described the vote as a “legislative setback”, and that “The war is far from over. We will continue this battle in the House of Representatives, where we know opposition to fast track is strong. A bipartisan collection of lawmakers in the House understand it makes no sense to give a quick up-or-down vote to bad trade deals like the Trans-Pacific Partnership that will only ship jobs overseas and lower wages in the U.S.”

The Communications Workers Union (CWA) said: “The limited discussion just this week in the Senate showed the serious concerns that surround Fast Track and the Trans-Pacific Partnership. Senators should not give away their right to amend a trade deal that has been negotiated in secrecy and is virtually complete.”

US and European unions (including the German trade union confederation the DGB and the powerful metalworkers union IG Metall, along with the British TUC and unions such as Unite, Unison, GMB and others) argue the new generation of trade agreements such as TTIP, CETA (the EU deal with Canada) and TPP will benefit multi-national corporations and the expense of working people, undermine employment rights, and allow for the take over of public assets by multi-national corporations, without any possibility of them being returned to public ownership.