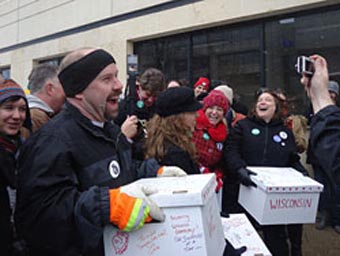 Unions and their supporters have gathered 1 million signatures supporting a recall election of right wing Republican Gov. Scott Walker exceeding the total number of signatures required by 460,000. Last year Walker, supported by the billionaires such as the Koch Brothers abolished the rights of public employees to collectively bargain. Overall, according to the AFL-CIO Walker’s policies are killing 18,000 jobs a year in Wisconsin, according to a recent report and more than 27,000 jobs have been lost since he signed the budget last year.

Working families also turned in 123 percent of the required signatures against Senate Majority Leader Scott Fitzgerald, who was thought one of the more challenging leaders to recall.

There also are enough signatures to force recall elections for the state’s lieutenant governor and two other state senators. The Wisconsin elections board will need to verify all the signatures.

Phil Neuenfeldt, president of the Wisconsin State AFL-CIO, said Wisconsinites want to recall Walker toput an end to his disastrous agenda and stop his attacks on working families. Putting corporate allies above the people of Wisconsin has led to months of job loss and a compromised economy.

Walker is giving $2.3 billion in new tax breaks to corporations and his rich cronies.

Stephanie Bloomingdale, secretary-treasurer of the Wisconsin State AFL-CIO, applauded union and community members whom she said have been gathering signatures “at union halls, grocery stores and bowling allies.”

Last February, when Gov. Walker announced his plan to bust public sector unions and the middle class, a spark was lit and the people of Wisconsin began to take notice of Gov. Walker’s real agenda. This is a governor who crippled the rights of workers, raised taxes on the poor, compromised our children’s education and made it harder for Wisconsinites to vote. The signs are clear, his agenda is not working and the people of Wisconsin won’t stand for two more years of Gov. Walker.

At worksites and around kitchen tables, at the Statehouse and door to door throughout Indiana, Hoosier workers have been speaking out and taking action against this anti-worker bill. Tens of thousands of workers have signed postcards now being hand-delivered to legislators urging a vote against RTW.

Indianapolis, union members are at the Statehouse, put 20,000 signed postcards and petitions in the hands of elected officials – Republicans and Democrats. United Steelworkers (USW) member Kelly Hugunin, one of many working every day to raise awareness on the job and in the community, says public opinion is with working Hoosiers.

Members of unions have been helping out with collecting and delivering postcards  to Indiana state representatives. The state House is expected to vote on key amendments today, including one that would put the RTW bill in the hands of Indiana voters.