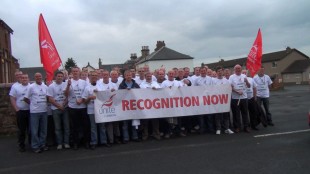 Unite had offered to negotiate a voluntary agreement with GE, but GE, determined to oppose recognition forced the workforce to go down the CAC route, a complex and legalistic procedure which gives employers time to delay the vote and run an anti-union campaign.

The company tried to persuade the workforce to reject union recognition, threatening to withhold future investment at the site.

The vote now gives Unite now a legal mandate to bargain collectively on behalf of the 750 workers employed at the Prestwick based plant who service and maintain aircraft engines.

The result confirmed by the CAC is the culmination of a year long and often bitter recognition campaign.

Unite is recognised at other GE plants in the UK, however GE has a record of opposing union recognition and bargaining collectively with its workforce when it can.

As Unite Scotland’s Senior Organiser Rozanne Foyer said: “This is a fantastic result achieved through the sheer hard work and perseverance of our members in GE Caledonian – it’s been a monumental effort to achieve this recognition.

In a time of great economic uncertainty, the workforce has moved to protect and advance their terms and conditions of employment in the most effective way possible; through a recognised trade union that bargains collectively.

Unite has long-established and positive working relationships with many employers in the industry, including other GE Aviation sites in the UK.

We welcome the further growth of Unite within GE Aviation and look forward to continuing our proud tradition of progressive employment relations across the aviation sector.”

In a message to all staff on Friday evening, Alan Kelly, managing director at GE Caledonian, saind Unite was ‘now recognised for colletive bargaining purposes.’ He said the company would now begin working with the union to establish an agreement to that effect.

Well done to Unite members at GE Cal, Unite Officers and Organisers on a great achievement.