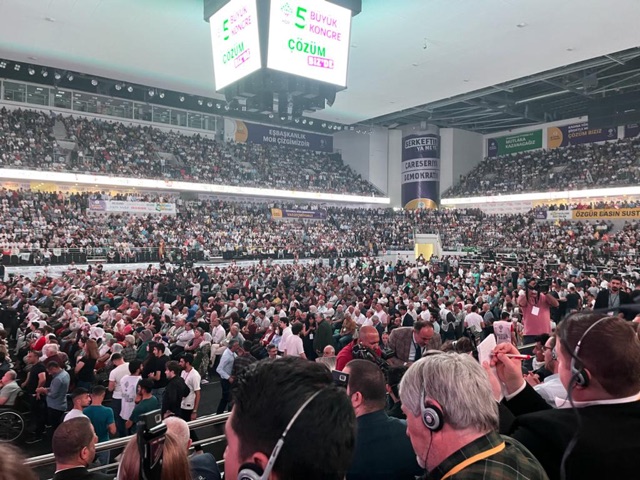 I attended what could be the last Congress of the left HDP Party (The Peoples’ Democratic Party) before the Turkish election next year with Labour MP Lloyd Russell Moyle.

Founded in 2012 the HDP held its 5th Congress in a large indoor sports hall on July 3rd in Ankara – attended by an estimated 10,000 people (many of them young people) with over 100 international guests and representatives from the European Parliament’s Socialists and Democrats (S&D) Group. HDP is an associate member of Party of European Socialists (PES) and a consultative member of the Socialist International.

The HDP’s political focus is based on radical democracy, feminism, LGBT rights, youth rights and egalitarianism and since the 2015 elections in Turkey the right wing and ultra-nationalist AK party led by current president Tayyip Erdogan has launched on going attacks on the party attempting to close it down and seize its assets before the next election.

Over 5000 HDP activists and supporters including politicians, trade unionists, lawyers, journalists and HDP staff have been arrested or jailed.

Under Erdogan Turkey is facing big economic problems with inflation running at 78% and a majority of young Turkish people (12% of all voters who pollsters predict will be decisive in a very tight election race) say they want change to improve job opportunities, education, and free speech. Other key issues for them include justice, immigration and transparent economic policies.

The congress hall was decorated with banners that read “Democracy alliance will win”, “Free press cannot be silenced”, “Peace and resolution, not war and isolation”, “Not a monistic regime but a democratic republic”, “Democratic resolution of the Kurdish question” and “Not hunger and poverty – but equal distribution”.

The keynote speeches were given by HDP Co-Chairs Pervin Buldan and Mithat Sancar.

Pervin Buldan was clear that she anticipated HDP will be a power brokers in an expected coalition. “Upcoming elections will not be about selecting the president or prime minister. It will be about building a new democratic and egalitarian order in Turkey. The HDP is the main driving force behind these elections and the process going forward” she told delegates.

Mithat Sancar told delegates: “It frightens and worries them, the fact that we are the strongest alternative to their authoritarian regime. That’s why they attack us with all their strength. They think they’re going to destroy us. But they will never succeed. We warn the AKP government; do not play games on the isolation of Abdullah Öcalan, (imprisoned in isolation on an island for over 20 years) do not use such a sensitive issue for your power goals. Our stance on the presidential election is clear. We are open to negotiations and the idea of a joint candidate, in case of transparent negotiations in front of the public.”