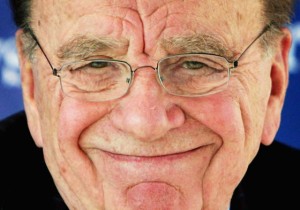 As we move the 25th anniversary of the News International dispute at Wapping next week this interesting article written by Harold Myerson appeared in the Washington Post on January 19th. Thanks to Tom Watson MP for tweeting the link.

“Amid the recent hubbub over the violent and paranoid rhetoric that stems from much of the American right, one name has been conspicuously absent. We’ve heard a great deal about Glenn Beck, Sarah Palin, Rush Limbaugh, Bill O’Reilly – the usual suspects. We’ve heard very little about the man who employs many of them for his financial and political gain: Rupert Murdoch.

Most coverage of Murdoch for the past couple weeks, in fact, suggests a very different story. The Good Rupert has been hard at work with Apple’s Steve Jobs developing a digital newspaper, to be called the Daily, for the iPad. Veteran journalists have been hired. For a modest fee, reports the New York Times, readers will be able to subscribe and have the Daily pop up on their iPad tablets every morning.

If it succeeds, the Daily will join Murdoch’s Wall Street Journal as two of the very few newspapers for which readers are willing to pay to read online. This is why Murdoch is often hailed, even by people who detest his politics, as a kind of journalistic savior – the man who figured out how to monetize the Web.

The other Murdoch story of recent weeks concerns the attempt of his company, News Corp., to buy Britain’s Sky Broadcasting company, and whether theongoing police investigation into illegal hacking by reporters at one of Murdoch’s British papers, News of the World, will make government regulators less inclined to approve the deal. But the deal has raised additional concerns – chiefly, whether combining News Corp. and Sky will give Murdoch too much control over news in the United Kingdom. An Enders Analysis study of Sky’s ratings and News Corp. readership concluded that 22 percent of the news that Brits consume would come from the merged conglomerate.

Even if Murdoch had no clearly defined political agenda, that level of concentration would still raise huge questions – about, for instance, such a company’s ability to slant news in ways that enhanced its financial prospects, or its market power to exclude certain stories from public scrutiny. The political slanting of news from News Corp. outlets, however, is conscious and constant. Consider, for instance, the memo (subsequently leaked) that Fox News Vice President Bill Sammon sent at the height of the health-care debate, shortly after Republican pollster Frank Luntz said on Sean Hannity’s Fox show that Americans were split on a “public” option but that when it was called a “government option,” voters overwhelmingly opposed it. Sammon directed news staffers to “use the term ‘government-run health insurance,’ or, when brevity is a concern, ‘government option,’ whenever possible.”

Murdoch’s appetite for news outlets in both old media and new is no less insatiable here than in Britain. His acquisitory zeal may at times appear less menacing because the product he turns out for elite audiences is often high-quality stuff. His purchase of the Wall Street Journal initially sparked concerns about what direction the Journal’s news pages might take. But in his bid to undercut the New York Times, he has turned the Journal’s weekend arts and literature section into an extremely smart cultural weekly with no discernible political bent.

Yet the stuff his company feeds mass audiences is the most sustained and coordinated dose of right-wing propaganda this country has ever seen. Father Coughlin, Joe McCarthy, George Wallace and their ilk were freelancers, much as Limbaugh is today. The choir at Fox News, by contrast, sings from Murdoch’s hymnal. Their mission, promoted by Fox News president and former Richard Nixon aide Roger Ailes, is to advance right-wing causes and Republicans.

Does Murdoch believe all the things that his Fox News employees say on the air? That,as Glenn Beck has alleged, President Obama hates white people? That the specter of socialist authoritarianism lurks behind Obama’s reformist policies? We have no way of knowing, though the fact that Murdoch has in the past endorsed reformists in the Obama mold – Tony Blair as Britain’s prime minister, Hillary Clinton for New York senator, when, to be sure, they looked likely to win – suggests that Murdoch personally doesn’t swallow all the swill he pays for. But even if he doesn’t exactly bank on the accuracy of Beck & Co.’s arguments, he finds their hyperbole useful in pushing the nation to the right.

So I’m hardly going to celebrate the debut of the Daily, media-business-breakthrough though it may be. No one did a better job of spinning and spreading the paranoid fantasies in which the right is awash than Murdoch’s Fox News employees. Time will tell if Murdoch has found a way to save journalism. It’s already clear that he’s found a way to degrade it”.

Update: The news that Cameron’s spin-meister Andy Coulson has resigned has been well covered in the media. The net was closing in on Coulson, with an inevitable invite from Mr. Plod to come in for more talks. The role of the Met is being called into question notably by John Prescott. But it also being asked what did News Corp know and when?

This year sees the 25th anniversary of the the sacking of 5,000 workers by Rupert Murdoch at Wapping. Coulson’s resignation is just one of the results of the events 25 years ago. Next week there is a meeting at St. Brides Institute on Fleet Street to begin the commemoration of those events where I will be looking be looking back, as well as putting into context the implications of the Wapping dispute and how the decision to sack 5,000 workers helped Murdoch become the most powerful mogul in the media world and his role in the development of current day right wing politics (including phone hacking).

In the meantime the Guardian’s editorial is worth reading.

This entry was posted in Media, Politics, Trade Unions, Unite The Union. Bookmark the permalink.