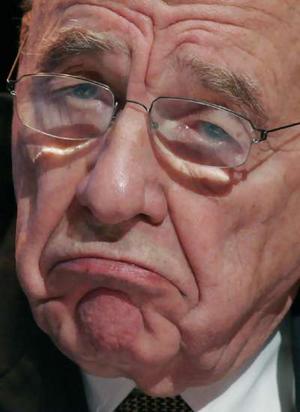 Rupert Murdoch’s friends in the ConDem government have given him approval to buy nearly half our private media. There are just 10 days to challenge the deal.

Last week, Avaaz UK flooded Parliament with 75,000 messages and phone calls, and joined with 400,000 Avaaz members around the world to stop Murdoch. The campaign made the news bulletins and major UK media.

These efforts have helped press the government to place conditions on Murdoch’s bid to control Britain’s largest commercial broadcaster as well as many of our biggest newspapers — now it’s time to up the pressure and stop Murdoch’s march to media domination.

Avaaz is now launching an all-out campaign to stop the Murdoch deal during the government’s 10 day consultation period. The aim is to:

The government is weakened following recent climbdown’s and the Libya fiascos and they don’t want another public humiliation.

It all comes down to how hard we fight. Click below to donate:

Rupert Murdoch has used his global media empire to push a right wing agenda across the globe.

No British Prime Minister in the last 20 years has been elected without Murdoch’s blessing. If he gains complete control of BSkyB, his grip on the British media and democracy will become almost untouchable. He’ll be able to use this additional power to fulfill his aim to break open the BBC, his largest global competitor, and replace it with his Sun and Fox New style of media.

But if the coming days return a massive poll result opposing the government’s deal, see MPs constituencies covered with bus shelter ads that make selling out to Murdoch an issue of character and personal reputation, and if even more legal barriers are thrown in the way – we can save our democracy and stop this deal.

Murdoch wins again and the public will be the loser
http://www.guardian.co.uk/commentisfree/2011/mar/06/observer-editorial-murdoch-bskyb

Jeremy Hunt is the fall guy in this deal
http://www.independent.co.uk/news/media/opinion/stephen-glover/stephen-glover-jeremy-hunt-is-the-fall-guy-in-this-deal-2234276.html