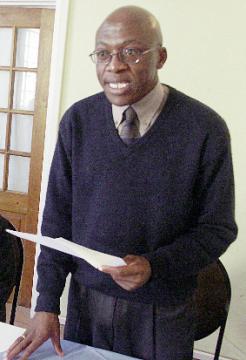 What would we do if David Cameron threatened at Prime Minister’s Question Time to strangle the TUC’s Frances O’Grady?

That’s what happened in Swaziland last week. Facing pressure from MPs about the suspension of benefits from the USA under the African Growth Opportunity Act (AGOA), Prime Minister Barnabas Dlamini threatened Vincent Ncongonwe the General Secretary of the Trades Union Congress of Swaziland (TUCOSWA), and a prominent human rights activist with ‘strangulation’ on their return from a civil society meeting in Washington DC.

Please help us protest at the outrageous threat made by Swaziland’s Prime Minister against Vincent Ncongwone, General Secretary of the Trades Union Congress of Swaziland (TUCOSWA).

Details are set out in a blog by the TUC’s Owen Tudor at the TUC’s Stronger Unions site by clicking here.

You can read Frances O’Grady’s letter to the Swaziland High Commissioner by clicking here.

Or you can just go straight to the LabourStart e-action and tell the Swazi regime – Africa’s last feudal dictatorship – to withdraw the threat.

Please encourage as many people in your union to raise awareness of this remarkable and appalling outburst, and take the LabourStart action. Over 2,000 people have already done so.

Read also the AFL-CIO’s response to this disgraceful threat.

Read the full report of what this feudal dictator said in the Times of Swaziland and the response from the union by clicking here.