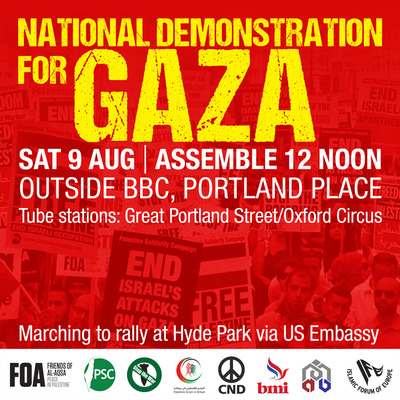 Where: Outside BBC HQ, Portland Place, London marching to Hyde Park via US Embassy

When: Assemble at 12 noon, August 9th

The latest figures from UN OCHA are sickening – at least 1,849 Palestinians killed, with more still be recovered from the rubble of destroyed buildings.

373,000 children needing psycho-social care due to the trauma.

And 65,000 displaced people have had their homes destroyed or damaged beyond repair.

Pressure is mounting on the UK Government over its silence over Israel’s massacre in Gaza, and the arms trade.

In the last few weeks, we’ve already marched twice through the streets of London, with 100,000 people.

All round the country, PSC branches have organised demonstations, protests and vigils.

Politicians have been deluged with complaints from voters, calling for action to stop Israel’s massacre.

Over 60,000 PSC supporters used one of our e-tools to write to their MP.

On 5th August, Baroness Warsi, the senior Foreign Office minister, resigned from the government, saying its ‘approach and language during the current crisis in Gaza is morally indefensible’.

The BBC has even agreed to air the Disaster Emergency Appeal (DEC).

However, a BBC reporter admitted on the Today Programme Israel admitting that Gaza is a ‘humanitarian disaster’ was a key part of the BBC’s decision to run the appeal.

The pressure is being felt – and now is the time to turn up the heat. Let’s make this a massive show of support for Palestine.