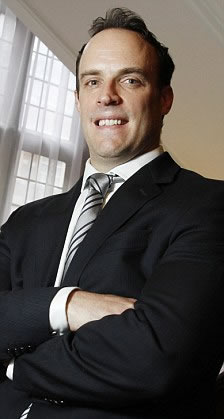 Tory right wing headbanger Dominic Raab has been at it again – advocating scrapping basic workers rights in order to boost the faltering economy. Devoid of a strategy as what to do Raab and his cohorts pushing hard to scrap basic employment rights – turning to ideas from the 1980s to revive their fortunes.

The TUC’s Sarah Veale posted this reponse to Raab’s lastest diabtibe on Left Foot Forward – but I thought it should get an airing here on Power In A Union. I just hope some Labour front benchers are taking note!

Sarah writes: “Here we go again – another proposal to get the economy back on its feet by getting rid of employment protection

Now Dominic Raab has come up with the same proposal plus nine others, equally ill thought out and based on no evidence whatsoever.

The evidence all points the other way of course.

The OECD, hardly a left leaning organisation, reported as long ago as 2006 in its Jobs Study, that countries with very different levels of regulation had experienced equal levels of success in generating employment.

The orthodox account was, for example, unable to explain why a number of European nations, such as Denmark, the Netherlands and Norway, displayed economic success despite their relatively highly regulated labour markets.

Few would argue a causal link at that time and nor should they now.

Taking the Raab proposals one at a time only one of them makes any economic or industrial sense. That one is greater use of alternative dispute resolution. Few would argue with that as a stand-alone proposal. Indeed it is what trade unions and ACAS do all the time. The rest are off the wall.

Excluding start ups and micro businesses from paying the National Minimum Wage (NMW) to those under 21, from the flexible work regulations, from the right to request time off for training and from pension auto-enrolment are the most offensive of Raab’s proposals.

When the NMW was introduced the CBI and others said that it would put many small and medium enterprises (SMEs) out of business. In fact they proliferated shortly after its introduction and many realised that having a basic floor for wages prevented a race to the bottom, undercutting and a cost to the Government where very low wages meant subsidies in terms of tax allowances and welfare top ups.

The Low Pay Commission, which has business and union support, endeavours to set the NMW each year at the highest rate that can be sustained without affecting jobs – and its comprehensive research has yet to find any employment impacts of the NMW’s introduction.

Flexible working benefits SMEs and many practice it without any disadvantages – some are better than large companies as they do not need to devise systems for managing it.

There is already an exemption from the right to request training for businesses with fewer than ten employees. Ensuring that all employees auto enrol for pensions ensures a basic level of financial support for all retired people, which is good for the economy.

His next proposal, to introduce no-fault dismissal for under-performing employees is what Beecroft was proposing as a replacement for unfair dismissal protection.

This would leave it entirely at the employer’s discretion to decide whether or not someone was under performing, with no system for reviewing the problem, putting in measures for improving the person, taking account of illness or the contribution of poor management to the poor performance. You cannot seriously propose to have an employment system based on hire and fire at will.

His proposal to strengthen the power of Employment Tribunals to strike out  and deter vexatious and spurious claims is redundant as they already have those powers, and use them. Installing a qualified registrar to pre-vet tribunal claims is a variation on the old Labour proposal to install legal officers in the tribunals to handle pre-hearing issues.

It is not a question of “vetting” claims – it is for the tripartite tribunal to make a reasoned judgement on whether or not a claim is spurious after sifting the evidence and listening to representations from both sides. That is a fair way of handling disputes between employers and employees and that is how our legal system  works in other areas. Why make it so one sided in employment matters?

Requiring a majority of support from balloted members for strikes in the emergency and transport sectors is an amalgamation of two back bench Tory ideas for curbing strikes.

The first would introduce a test that does not exist in any other form of statutory ballot, including for Parliament and local government. It would mean that all abstentions in industrial action ballots in these two sectors would count as “no” votes and would almost certainly trigger more wild cat action from frustrated workers.

The limitation of the proposal to these sectors is a crude attempt to prevent the successful strikes on London Underground and elsewhere on the railways. The addition of emergency services is a way of dressing the proposal up to look more reasonable.

Unions already have to go through a highly complex set of procedures before they can take strike action and the courts have been very ready to stop strikes when employers challenge ballot results or find other technical errors. Even the PM has said that our strike laws, introduced by Thatcher’s government, are still “fit for purpose”.

It is a hallmark of a democratic society that workers are able to withdraw their labour if they can find no other way of resolving a dispute. It is a last resort but a necessary one.

It is not clear what Raab means by “reforming TUPE” but presumably he wants to make it easier for private sector firms to take over public services,  reduce the wage bill and worsen the agreed terms and conditions. More racing to the bottom in other words.

Finally he wants to abolish the Agency Workers Regulations and the Working Time Regulations. Apart from the minor matter of both of these deriving from EU Directives, what Raab is saying is that it is a good thing for workers to have no paid holidays, no control over their working hours and that agency workers should be used as a cheap form of flexible labour, with few rights.

He may find that this does not go down well with the electorate in 2015. These protections are not just in place for the benefit of the workers, important thought that is, but to protect the public from exposure to lorry drivers falling asleep at the wheel after a non stop 15 hour shift, ensuring that children can see more of their  parents and preventing a full scale reversion to Victorian ways.

His next proposal will no doubt be to have children working in factories and the removal of railway signals, which do, after all, impede the free running of trains.