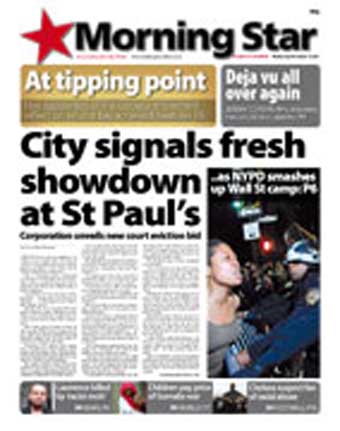 Once again, the Morning Star must appeal to its backbone and its lifeblood, the readers who own, support and underwrite the paper – in short, you. And if you do not respond, and soon, there may well not be a paper to support.

It has been an eventful and in many ways successful four or five years for the Morning Star.

In that period, we have gained formal support and a presence on our board of management from a solid majority of the organised trade union movement – a first that has astonished – and gratified – people throughout the labour movement.

We have established an enthusiastic and successful readers and supporters group within Parliament.

With the help of a consortium of sponsors we have established a new, brighter and bigger format of Morning Star that allowed us to maintain our circulation despite a swingeing price rise forced on us by ever-escalating costs.

We have in many ways become the voice of the trade union movement, as witness the 53,000 copies of our biggest ever edition on March 26.

Thanks to our friends and sponsors, we were able to give away 30,000 on the huge London demo – an edition that drew wide praise.

But unlike the capitalist newspapers such successes do not ensure our survival and the paper is once again on the brink of financial meltdown.

In one sense it’s easily understandable.

No normal newspaper could ever withstand the half-century of commercial advertising boycott that ours has had to.

The unions have done what they can, but a normal ratio of advertising to news copy in our pages has been denied us.

And no newspaper exists on its cover price alone.

So what has kept us alive throughout that half-century of boycott?

With appeals and donations and with a Fighting Fund while they are with us and with legacies when they pass on, readers have helped us to withstand a half-century of unremitting attack.

But neither the paper nor its readers are immune from the world around us and times are hard.

It costs around £1.4 million each year to produce the paper.

The Fighting Fund aims and is budgeted to achieve £16,000 each and every month.

But hard times mean that it hasn’t managed that for the better part of three years, falling short by an average of around £3,000 each month.

The one reliable commercial advertising stream that the paper had – from insolvency practitioners – dried up when new Labour “deregulated” bankruptcy provisions.

And our forced reliance on an imperfect road transport system has resulted in losses of paper sales over that same three-year period that at the very least match yet another £100,000.

These are not losses out of any well of profit.

And we cannot sustain losses in the same way as the capitalist press.

So we are now at a crossroads.

Cashflow problems mean that we can pay the wages this week, but there is no certainty about next week.

And, should we survive that week, the same problems will occur the week after.

Our staff are not overpaid.

None earn anything approaching the average industrial wage.

We even have legacies pending that could see us through the worse of this crisis, but they must pass through the full legal cycle before we can touch them and that could be months – time we do not have.

So it comes down to this.

We need every supporter to rally round and back us, contribute what they can and take us through this immediate crisis not of our own making.

We will need the efforts of every reader, of each readers and supporters group, every communist and every socialist and every trade unionist of goodwill.

We must raise at least an additional £50,000 before Christmas – and the sooner the better – or our paper will not survive.

And survive it must if it is to play the part that is needed during the resistance to the bankers’ putch that is, with the assistance of the Tories and their allies across Europe, being conducted agaist every working man and woman in Europe.

Are you up for the struggle?

If you have enjoyed this article then please consider donating to the Morning Star’s Fighting Fund to ensure we can keep publishing your paper.

Donate to the Fighting Fund here