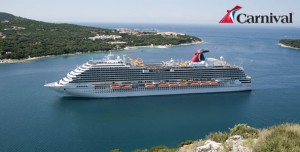 UPDATEs: Listen to USW’s Joe Drexler on the strike at Crown Holdings in Canada by clicking here.

The United Steelworkers in the USA and Canada have taken their dispute with Crown Holdings, the multi national packaging company to cruise ships owned by Carnival Cruises.

USW members have been handing out union leaflets and wearing T-shirts in support of their members forced out on strike at the Crown plant in Toronto, Canada. The Steelworkers are leafleting passengers and wearing t-shirts with Carnival Cruise CEO’s picture with the slogan: “Why is Arnold Donald attacking the middle class?”

Recently the union handed out leaflets at the cruise company’s headquarters in Florida and in Philadelphia to protest at the role of Carnival CEO Arnold Donald, who also serves as director at Crown Holdings.

Crown has sites across the world including in the UK organised by Unite and the GMB. Unite is supporting the striking Toronto workers through its global union with the USW – Workers Uniting.

Crown Holdings is one of the world’s largest manufacturers of food and beverage containers.

“The USW believes that by supporting Crown Holdings in its forced strike, Arnold Donald is undermining Carnival’s business model that relies on good wages and employer-paid leave to fill Carnival’s ships,” the USW said recently.

“Donald’s role in the Crown strike is bringing unwanted attention to Carnival at a time when the company is recovering from numerous set backs and blows to its image due to the Costa Concordia disaster and other major incidents of cruise ships malfunctioning at sea, stranded passengers and on-board fatalities,” the union said.

The email, which USW says was sent to some 16,000 travel agents, cited the Costa Concordia disaster, allegations of health and safety issues, the Carnival Dream power outage and the fire aboard the Dawn Princess.

The email also asked if travel agents or their agencies will be liable for a “passengers disastrous experience while on vacation?” before answering its own question with “Yes, travel agents can, in certain circumstances, be held liable, at least in part, when things go wrong during travel.”

The final line of the USW sent email describes the message as a public service announcement brought to you by the United Steelworkers.”