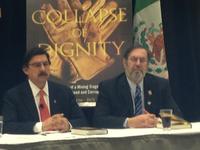 Fresh from a series of resounding legal victories, Mexican mine workers leader Napoleón Gómez has written a book that exposes the Mexican government’s seven-year campaign to destroy democratic unions and drive down workers’ wages. Gómez won the AFL-CIO’s Meany-Kirkland Human Rights Award in 2011.

Endorsing the book, AFL-CIO President Richard Trumka stated: “Napoleón is a hero, because every day he fights for the lives and welfare of the Mexican workers and their families.”

Gómez’s book, ‘Collapse Of Dignity’, opens with the explosion at the Pasta de Conchos mine in 2006 that killed 65 miners.

Gómez describes the collaboration between government officials and business leaders to undermine the union with criminal charges, threats and violence. He explains how the mineworkers fought back with support from unions around the world.

‘Collapse of Dignity’ was launched this week during the United Steelworkers (USW) Canadian National Policy Conference in Vancouver, where Gómez has lived in exile since 2006.

The book, with a foreword by USW President Leo W. Gerard, can be ordered online at www.CollapseOfDignity.com.

As his book went to press, Gómez received good news that the global police agency Interpol has canceled an international warrant issued in 2006.

A few weeks earlier, a Mexican court ordered the government to notify Interpol that the government’s charges against him had all been dismissed.

“The Interpol decision shows that Mexico can no longer use international agencies to persecute its political enemies,” said Leo Gerard. “Napoleón’s only crime is making employers in Mexico raise wages so they can no longer undercut workers in the U.S. and Canada. Mexico’s new president should end the persecution of Napoleón and his union and let him go home.”