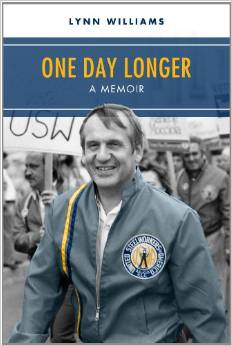 The former International President of the United Steelworkers Lynn Williams who was to be the first Canadian to lead the USW at a tumultuous time for the union and the steel industry has died aged 89.

“Lynn Williams held this union together through the worst of times, the massive bankruptcies and consolidations in the U.S. steel industry. Lynn showed that he was a leader of great compassion and ingenuity, securing deals to help save as much of the industry as possible while at the same time preserving pensions and benefits for workers” said the current President of the USW Leo Gerard. Williams was a mentor to fellow Canadian Gerard.

Lynn Williams was the son of an Ontario minister. He became Steelworkers representative in Ontario in 1956. He became district director for the union from Ontario west in 1973 and was international secretary of the United Steelworkers International in the 1970s, when he moved to Pittsburgh. He was also a member of the Executive Council of the American Federation of Labor-Congress of Industrial Organizations (AFL-CIO) and the Canadian Labour Congress.

He had become interim president in November 1983 after the previous president, died.

The steel industry, in the United States was going through a disaster that saw USW membership drop by 400,000 between 1980 and 1984 as steel mills closed and foreign competition became stronger.

“It was a bizarre time in Pittsburgh,” Williams recalled in a 2001 interview. “The steel industry was being torn apart, but there was a lot of real estate development taking place downtown. I would take out-of-town guests downtown and they would say, ‘This doesn’t look bad,’ but Pittsburgh really was in a crisis.”

In his book ‘One Day Longer’ Williams credited his parents and his time in the union with helping him develop a pragmatic strategy as the steel industry changed with strong competition from foreign producers.

“I had learned that helping better our members’ lives and working conditions was not about vindictiveness and score settling; instead it was about finding a balance between pushing hard for your workers and knowing when to make compromises that would protect their jobs in the long term,” Williams wrote.

That included negotiating seats at the company’s table for employees in some of the steel companies where the United Steelworkers had contracts. He also created the Voluntary Employee Benefit Association to help employees whose steel companies filed for bankruptcy, and the Institute for Career Development educational program.

But he also pushed hard for his workers, leading United Steelworkers in strikes in the mid-1980s

After he retired in 1994, he moved back to Canada, and became president of the Steelworkers Organization of Active Retirees.

University of Toronto Press Inc. published his book ‘One Day Longer’ in 2011.

Lynn attended a reception for delegates to the Workers Uniting Conference (Unite and USW) in Toronto last year and delegates were given a copy of his book. It is a fine history and memoir of a true trade unionist who inspired his members and fellow officials. His is leadership set the foundations for the Steelworkers to become the USA and Canada’s largest and strongest manufacturing union.