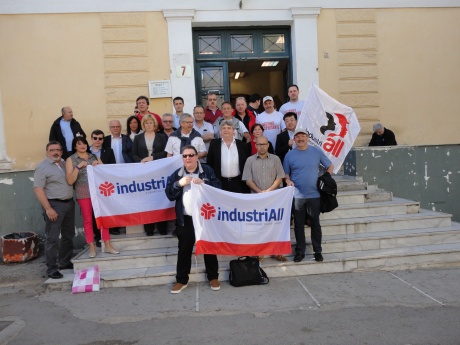 The Greek Metal Workers’ union, POEM, is celebrating a great victory after a verdict was finally handed down in the Skaramanga Shipyard court case on 5th May.

Eleven of the twelve trade unionists facing jail terms were set free immediately and one received a six month suspended sentence. The verdict came after a two-year struggle by European trade unions to help win justice for the Greek Metal Workers.

The shipbuilding workers in Greece, members the Panhellenic Metal Workers’ Federation (POEM), have faced severe attacks by the Greek Government.

Workers in shipbuilding have been victims of deteriorating working conditions since the economic crisis hit Greece badly. This eventually led the workers at the Hellenic Shipyard in Skaramanga to go on strike on 4th October 2012.

Their jobs, job security and back wages were used in a dispute between the shipyard operators and the Greek Ministry of Defence for which the Skaramanga site exclusively builds submarines and navy vessels.

POEM member’s wages had not been paid for a year and the Ministry has remained indifferent to their plight.

Clashes with police forces occurred during a demonstration and protest action at the Ministry of Defence.

As a result of the attacks by the Police and the Ministry, charges against 12 trade unionists, including POEM’s President, were filed and their struggle has been carried into the courts.

The first court hearing took place in October last year when hundreds of trade unionists gathered in Athens (including delegates from Unite, Belgium, Czech Republic, France, Spain, Germany and Scandinavia) for a conference and demonstration called to support the shipyard workers – all of whom who faced jail terms under the draconian Greek anti-union laws. The court case was postponed to 5th May this year.

IndustriALL and its affiliates continued to campaign for justice for the Greek shipyard workers through to the May 5th court case.

I was proud to be part of the IndustriAll European Trade Union delegation to the original conference and demonstration and attended the Athens court on May 5th to show our continued solidarity.

The May 5th court case lasted six hours after which those facing jail set free to acclaim from union members demonstrating outside the court – proving that international solidarity really works.