Liam Fox’s desperate dash for trade deals is in tatters 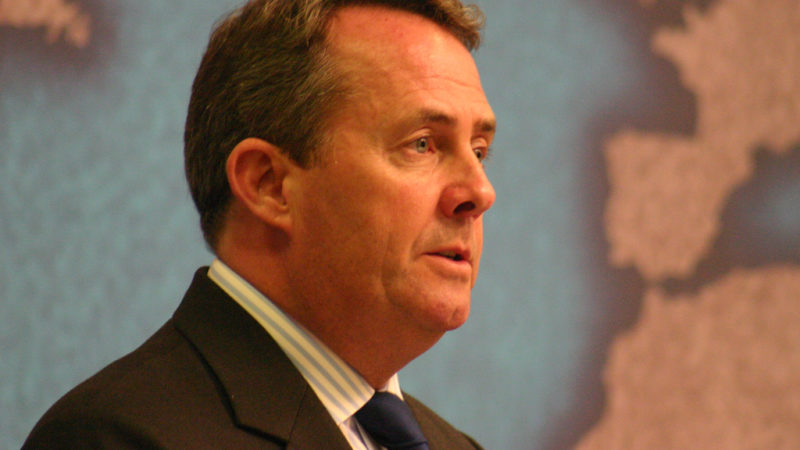 It wasn’t supposed to be like this was is it? International Trade Secretary Dr. Liam Fox, currently second in the incompetency stakes behind transport secretary Chris Grayling (but just in front of Gavin Williamson) once told the UK that getting new trade deals to replace the loss of the biggest trade deal of all with the EU would be easy.

He told the nation, business and working people that 40 deals would be ready for ‘one second after midnight’ on Brexit day.

In March 2018 he told the BBC Radio 4 Today programme:

“We will have arrangements that we will be able to roll over from the European Union’s agreements, we hope to have around 40 of those. We hope we will have all of those in place by the time we go.

He went onto say that he wanted the UK to take advantage of ‘being able to negotiate beyond the European Union’s borders’.

“We’ve got 14 working groups in place with 21 countries at the present time I’d hope to make as much progress as possible because we need to have a confident and optimistic agenda for Britain’s future,” he said. He told the BBC trade talks had begun with Australia, New Zealand and the USA.

Of course it was total hogwash. While Fox was busy racking up air miles and getting nowhere fast in negotiating these phantom trade deals, others were warning that the 40 countries would not just be rolled over – and why should they?

The UK was leaving the EU – and they would squeeze the UK for everything they could get. These countries would also want to see what sort of deal the UK struck with the EU.

Dr. Fox was given regular reminders by industry and unions that it took the EU over seven years to negotiate the EU-Canada deal (CETA). But he carried on ‘grandstanding’, to quote Labour’s shadow trade secretary Barry Gardiner.

That was until last week, when he was forced to admit it was not going as well as expected. Fox had to admit that the government was significantly behind in securing the 40 free trade deals with only a handful agreed so far.

It appears only six of the 40 deals are likely to be in place by Brexit day: 30 deals that need to be ready are now considered ‘off-track’.

The Department for International Trade is using a system of ‘traffic lights’. The green section includes those that are ‘on track’ and to be implemented by Brexit day – Switzerland, Chile, Israel, the Palestinian Authority, the Eastern and Southern African block and the Faroe Islands (the latter worth £360 million). Yet the document states that ‘risks remain’ even with these deals.

There are nine agreements in the ‘yellow’ section, described as ‘off track’, and 19 agreements are in the ‘red’ section, which are ‘significantly off-track’ in terms of deliverability by March 2019 . The countries listed under these sections include Canada, South Korea, Egypt and Jordan. Further agreements are in a list with the heading “not possible to be completed by March 2019” and include Turkey, Japan and Algeria.

Dr Simon Usherwood, a reader in politics at the University of Surrey, said the apparent status of the trade deals was unsurprising:

“The problems with the promises made by Liam Fox have long been evident: renegotiating trade deals is long and difficult work at the best of times, let alone when the UK’s relationship with the EU (its main trading partner) remains unclear.

“In an effort to steady the ship one unnamed minister said they hoped to sign ‘letters of understanding with all the remaining countries, will go some way to reassuring business.”

The progress in replicating the EU free trade deals so far amounts to just £16bn of the possible £117bn the 40 agreements cover.

Further blows to the government came in the shape of defence minister Gavin Williamson’s foolish announcement that he would be (at some point) be sending our new aircraft carrier Queen Elizabeth 2 to the South China Sea (for what purpose other than sabre rattling and to be a sitting duck – we don’t know).

The comments by Gavin Williamson (now dubbed ‘Private Pike’ after the ‘Dad’s Army’ character) were held responsible for killing off (for a while) Chancellor Phiilip Hammond’s immanent visit to China, which was abruptly cancelled by the latter. As Captain Mainwaring would have said: “Stupid Boy!”

Hammond’s visit was seen as a precursor to the very long road in negotiating a trade deal with China, which will take many years. The Chinese will prove to be just as hard bargainers as Barnier and Tusk.

Then came UK’s attempt to persuade Japan to agree a a fast track post-Brexit trade deal. Tokyo reacted to a letter from the foreign secretary, Jeremy Hunt, which told their Japanese counterparts that ‘time is of the essence’ and said flexibility would be required on both sides.

The letter, sent on February 8th, did the job in winding up Japanese officials who believed that the letter (which said that “we are committed to speed and flexibility and hope that Japan is too”)  accused Tokyo of ‘foot-dragging’.

It forced Japan to consider calling off trade talks. The UK needs a deal in place of the EU-Japan trade agreement, which came into force on February 1st, but it had given up hope it coming into force by March 29th. Japan had agreed to extend existing trade terms for the duration of Britain’s planned transition period with the EU. But in case of a no-deal Brexit, the EU-Japan agreement would no longer apply to the UK.

Over 18 months of negotiations Japan and the UK have failed to make significant breakthroughs on a trade deal as Japan will not accept a cut and paste job on the terms of the EU-Japan agreement. Instead Japan wants a better deal from the UK than it got from the much larger EU.

Then last week Australia, having said they would consider a ‘fast track’ deal poured a  bucket of cold water on any UK ambition to join the Comprehensive and Progressive Agreement for Trans-Pacific Partnership (CPTPP).

Australia’s trade minister Simon Birmingham said that it was unlikely the UK would be joining the CPTPP deal largely because ‘it is not in the Pacific’. Fox has frequently stated his desire for Britain to join CPTPP, an agreement that includes Australia, Japan, Canada, and several other nations.

Birmingham also joined voices urging British politicians to provide clarity on the country’s future trading relationship with the rest of the world.

Fox has even managed to damage relationships with industry here in the UK. His department is responsible for setting up the Trade Remedies Authority, which will over see and handle the important issue of tariffs and the dumping of goods on the UK market.

A number of manufacturing groups are working with unions including the TUC and Unite to ensure the UK has in place a trade remedies structure to stop dumping of imports of steel, tyres, ceramics, glass, chemicals etc – but this is some way off.

Fox has refused to give trade unions a place on the authority – despite employers involved agreeing unions need to be represented.

A hapless Fox raised the spectre of zero-tariffs on imported goods with a group manufacturing employers which received a frosty response: “I would urge Liam Fox to think again and think about the damage this plan would do to our industry,” said Dr. Laura Cohen, chief executive of the Ceramics Confederation and chair of the Manufacturing Trade Remedies Alliance.

So not a good week for the DIT and the government. Its policy of securing trade agreements to replace our agreement with the EU is in tatters and the UK is staring disaster in the face.

Employers are exasperated, jobs are at risk, and other countries are either flexing their muscles or waiting to see what happens. The idea that we can ‘swash-buckle’ our way around the world using gun boat diplomacy is dead.

But not to worry: Donald Trump says he is ready to do a ‘great trade deal’ with the UK.

We know what that means from a man who claims to be the greatest deal maker on the planet. Meanwhile Dr. Fox pretends all is well.

This entry was posted in Blogs, Trade Unions. Bookmark the permalink.