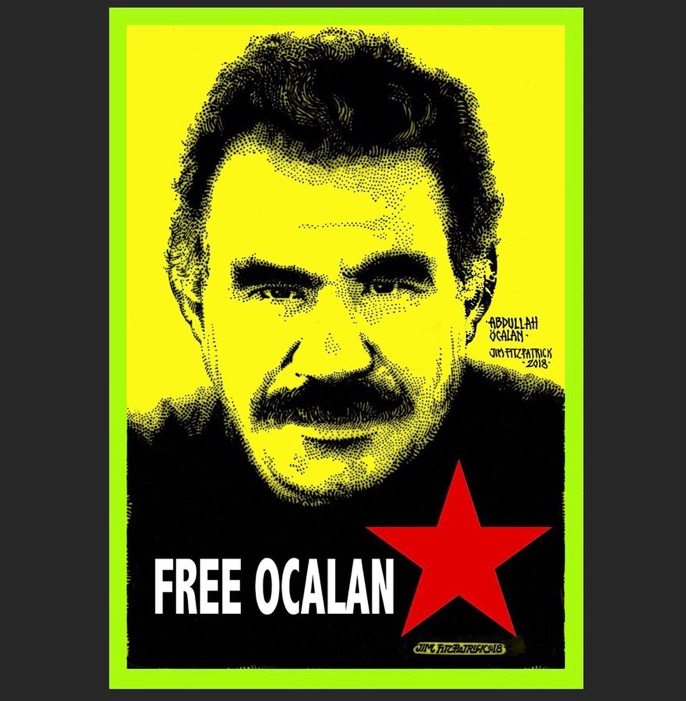 Abdullah Öcalan’s unlawful and inhumane isolation must be ended immediately. Otherwise hundreds of people who are on hunger strike in Turkish prisons and outside Turkey face certain death in the coming days and weeks. Today, 15 February 2019, marks both the 20th anniversary of Öcalan’s abduction and the 100th day of HDP MP Leyla Güven´s hunger strike. The situation now for Ms. Güven and the more than 330 others on hunger strike around the world is beyond critical. By failing to exert pressure on the Turkish authorities to abide by their own laws and constitution and the most basic international human rights standards, the international community must be regarded as complicit in serious human rights abuses committed by the Turkish government. We therefore urge the international community to break its silence.

We the undersigned appeal to the government of Turkey to immediately break the isolation of Abdullah Öcalan, and thus open up the way for peace negotiations. Öcalan has been held in a state of aggravated isolation since 2015, and has not been allowed to contact a lawyer since 2011, in violation of the most basic human rights. The policy of isolation that has been imposed upon Öcalan, and the three others imprisoned on İmralı Island, is not only in violation of International Law and the European Convention on Human Rights, which Turkey is obliged to uphold as a member of the Council of Europe, but is also a violation of Turkey´s own domestic laws and constitution. We regret not having been granted a meeting with the Turkish Minister of Justice in accordance with the request in our letter dated the 21st of January, where we raised our concern for the state of human rights in Turkey, and the systematic practice of imprisonment on political premises. In this meeting, we hoped for the opportunity to voice our concerns and hear the minister’s reactions.

During our visit, we have met with various groups, including the Human Rights Association, the BAR Association, the Democratic Societies Congress, trade unions, the Women´s Movement, the Peace Mothers, and the lawyers of Abdullah Öcalan. We have also met with HDP MP Leyla Güven, then on her 98th day of hunger strike. She said to us that her hunger strike is not an act of suicide, but rather an act of love for life; to be able to live with human dignity.

We wish to amplify this message, and make it echo throughout parliament halls and congress chambers around the world. The sole demand of Ms. Güven, the 313 individuals on hunger strike in prisons across Turkey, and the other hunger strikers in Hewler, Strasbourg and Wales, is to end the isolation imposed on Abdullah Öcalan. This demand is ultimately a very simple one; that Turkey comply with and enforce its own laws. It is our firm belief that this critical situation could be changed for the better in a very short time, depending on the actions of the Turkish authorities.

The ultimate reason for the hunger strikes, and the point we have heard repeated continuously by every group we have met with, is a just peace. It is ubiquitously believed that the first step to restart the peace process and realize a lasting peace is to end the policy of isolation imposed on Abdullah Öcalan and the other prisoners of İmralı Island. This is because Öcalan is recognized as the political representative of the people of Kurdistan, he has been a consistent and convincing voice calling for peace, and he has provided a detailed roadmap to achieve a peaceful resolution of the Kurdish question and a democratic settlement of the Middle Eastern conflict.

The situation of the hunger strikers is at a dangerous point, and it is imperative that the government of Turkey acts to end the isolation now, before there is further violence and bloodshed. During our visit, many people have asked us how it could be that the world has remained so silent on the obvious human rights abuses in Turkey for so long. We share their astonishment and outrage, and moreover, we agree with them that the key to the solution of this critical and worsening situation lies in the hands of the Turkish government; all they must do is turn it.