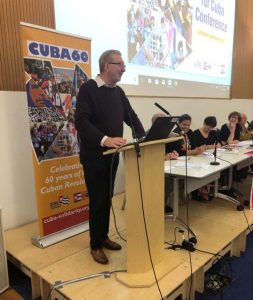 Good morning comrades and friends. I feel especially proud and privileged to be invited to speak here today.

Here at this conference marking:

But before I go on can I personally acknowledge the presence of:

Carmen Rosa López Rodríguez, the Deputy General Secretary of the CTC, and the rest of her delegation and

Can I also congratulate Rob Miller and his team at Cuba Solidarity Campaign in putting on today’s event? A truly great event as we’ve come to expect from CSC.

Of course I was a child in 1959 but I do remember reports of what had happened in Cuba and how many in the dock workers’ community where I was brought up welcomed the news.

Similar scenes were reported from mining districts when news of the Russian Revolution first reached Britain in 1917, miners on the streets crying tears of joy.

And what news it was to welcome.

A US backed fascist dictatorship, installed to protect US agricultural plantations and mafia run gambling and prostitution operations, had been toppled by a lightly armed, small in number, guerrilla army.

No one in the elite really believed it had happened; they took off for Florida expecting to come back to their mansions and plantations in a couple of months when the Revolution had blown over.

That’s what made it different. 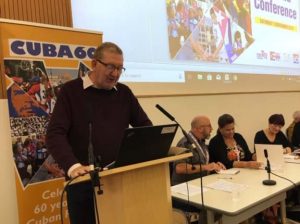 I’m sure you will hear here today details of the great social advances that have been made in Cuba since 1959:

From trade union activists being tortured and executed under Batista today workers and their unions, organised by the CTC, have a special place in Cuban life.

Workers and their unions have to be fully consulted and involved in decision making at workplace level.

The CTC and its affiliates are included in the great economic decisions that have to be made by the government.

When the new labour code was being drafted, the CTC organised innumerable workplace meetings of union members who are articulated demands for change and, most importantly, amendment or rejection of the government’s proposals.

You may know that I have often given the government here advice on its labour laws but unfortunately I do not seem to enjoy the same sway with our government as the general secretary of the CTC does with his.

The setting a good example has not been welcomed by Cuba’s northern neighbour.

Since 1962 an illegal blockade of Cuba has been enforced by the US.

Money that could have been spent to further benefit the lives of Cuban workers and their families.

Although there was an apparent freeze under Obama the blockade remained in place and has been hardened under Trump causing real hardship to everyone in Cuba.

The blockade is of course an attempt at regime change, to bring back big US agrifood industry and the mafia, to return Cuba to the dark ages of Batista.

As socialists, our commitment to international solidarity demands that we stand by Cuban workers, their unions and their revolution.

Building on the unprecedented solidarity work for the Miami 5 by the unions here in Britain Unite was able to mobilise unions in the US to this cause.

Our campaigning work, reaching up to the highest levels of government and into the law courts, helped break the wall of silence and eventually led to freedom for the 5.

International solidarity is course reciprocal and in the past 60 years the Cubans have been to the forefront.

In 1988 members of the Revolutionary Armed Forces halted the South African advance northwards into Angola at Cuito Cuanavale; an action remembered by Nelson Mandela:

Cuban medical brigades have been the first into places of natural disaster or serious epidemic – Pakistan, west Africa, Haiti and Ecuador.

Operation Miracle has restored the sight to 3.4 millionpeople in Latin America, including the Bolivian solider who executed Che Guevara.

Since 1959 Cuba has been a beacon to progressive forces in Latin America and the developing world.

In the early years of this century progressive governments came to power all across Latin America; most recently in Mexico, and down as far as Argentina, many acknowledging their Cuban inspiration.

Times have changed and much of that advance has been reversed by:

But it’s not over by any means. In October this year:

And Cuba stands firm in the face of unprecedented economic attack from the US.

Some years ago, before the time of Evo Morales, a leader of the Bolivian trade unions came to visit our office. “What would you say is the most important task?” he was asked. “The defence of Cuba” was his reply.

Comrades, we can demand of ourselves nothing less than that.