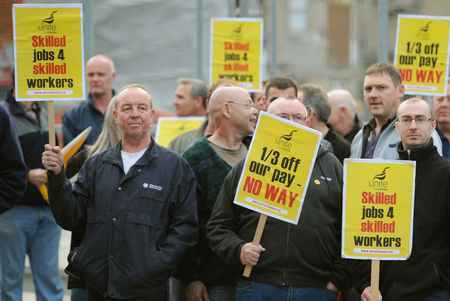 Unite has welcomed the withdrawal of contracts by Balfour Beatty Engineering Services (BBES), which would have resulted in the termination of long-held agreements and the de-skilling of construction workers.

The imposition of the new contracts by BBES were at the heart of a long running dispute, which saw electricians, plumbers, heating and ventilating engineers vote overwhelmingly for strike action twice.

The withdrawal of the contracts follows talks between Unite general secretary, Len McCluskey and Balfour Beatty’s Chief Executive Officer, Mike Peasland. They will be followed by further high level talks to secure members’ livelihoods and the stability of the industry.

BBES was one of seven construction firms who sought to tear up the long-standing Joint Industry Boards agreements and impose new semi-skilled grades. The new contracts would have led to pay cuts of up to 30 per cent and poorer terms and conditions for key construction staff.

The union has called on the other six firms to follow the lead of the main player Balfour Beatty and withdraw the contracts and the threat of dismissal.

Welcoming the news, Len McCluskey, general secretary of Unite, said: “Balfour Beatty’s decision to withdraw these contracts, the threat of dismissal and to enter high level talks is a welcome move. Not only is it a victory for common sense, but is testament to the resolve of hard working construction workers who have stood shoulder to shoulder to defend their livelihoods.

“Continuing to impose these contracts would have resulted in a race to the bottom that would have been bad for the industry. We expect the other six construction firms to see sense and follow Balfour Beatty’s lead in talking seriously about securing livelihoods and bringing stability to the industry.”

The current dispute between Unite and the seven companies who are promoting the BESNA agreement is causing serious concern within the industry and threatens to escalate into a damaging conflict.

The objective of the seven companies was to address perceived shortcomings within current working rules agreements and to offer ways to create a more modern approach in the current competitive environment.

Unite understands the questions raised by those seven companies and believes a review of the JIB and other industry working rule agreements is desirable.

BBES has agreed to withdraw the BESNA contracts and Unite has agreed not to pursue further industrial action or protest on the basis that wide ranging talks will now take place on modernising the industry.  Both parties are committed to high level talks within an agreed timeline with the aim of creating new proposals and ensuring agreed terms are honoured.

It is the intention of Unite, along with the employers’ associations and reputable companies, to bring stability and fairness to this section of the construction industry.• JOINT STATEMENT ENDS •

Unite has been advised that there are companies acting outside the JIB and give notice that they will be singled out for action in order to bring them back in line with the acceptable standards of the industry.