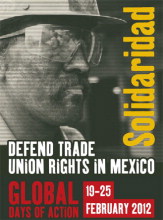 Last year more than 50,000 union members, students and human rights activists from some 40 countries participated in the Global Days of Action, launched on February 14th in Mexico and Australia simultaneously. For six days union members came together in an unprecedented show of solidarity. Thousands of letters were sent to the Mexican government, more than 50 meetings were held at Mexican Embassies throughout the world, and massive demonstrations throughout the week, inside and outside of Mexico, marked the strength and urgency of our message: STOP the attack on workers, we demand Trade Union Rights in Mexico, NOW!

The impact of our global actions were felt around the world. On February 24th, just weeks after Global Action Days launched, political prisoner Juan Linares of the National Miners’ and Metalworkers’ Union of Mexico was released from jail after being unjustly imprisoned for more than two years. Building on our 2011 actions, independent unions in Mexico, together with their respective global union partners, have come together as a movement of force, challenging regressive labour legislation, Mexico’s scandalous “Protection Contract” system, and exposing corporate and political corruption.

Despite an escalation in action and outcry from unions in Mexico and at the international level, workers continue to be denied fundamental rights, independent unions face violent and political attack, and corporate impunity is at an all time high.

During the week of February 19th -25th, 2012, in memory of the Pasta de Conchos miners who died in a mine blast on February 19th, 2006, members of the international labour movement are again asked to take action.

• Request a meeting with Mexican Embassy/Consulate representatives to discuss trade union rights in Mexico.
• Organize a small delegation to deliver a statement or letter to your local Mexican
Embassy/Consulate (see model letter).
• Send a letter (see model letter) to your local Mexican Embassy/Consulate.
• Engage national policy makers to join meetings with Embassy representatives or to send similar letters to the Government of Mexico.
• Publicise actions taken in defense of trade union rights in Mexico on your union’s website and in its publications.

CAMPAIGN MATERIALS :
Print-ready posters and model letters can be downloaded from the IMF website