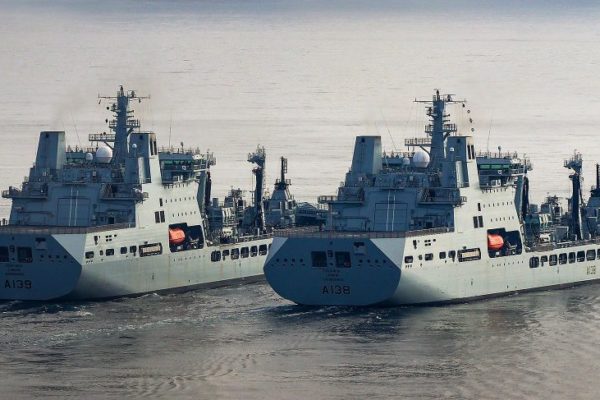 Following our story in UNITElive earlier this month on the campaign to build the Royal Naval Fleet Solid Support (FSS) ships within the UK, the Labour is now backing Unite and the other unions involved, with a new campaign ‘Built in Britain’ and a petition.

On August 14th UNITElive reported that our world-class shipbuilding industries and 40,000 highly skilled jobs were now in jeopardy after the government went back on its word to build Royal Navy fleet support ships in the UK – by sneakily inviting overseas yards into bidding to build three new key ships.

The estimated £1.5bn ministry of defence (MoD) contract to build three Fleet Solid Support (FSS) ships that will help keep the Navy’s new aircraft carriers at sea, provide them with stores including ammunition and food, has been put out to overseas tender.

In effect this would see ‘shovel ready’ work, funded by the UK taxpayer, dished out on a plate to overseas yards, while UK shipbuilding workers lose this significant opportunity to keep their jobs, their futures – and the UK – afloat.

Unite said this move goes against the recommendations of the National Ship Building Strategy, and betrays the nation.

But earlier this week (August 24) the Daily Mirror revealed that Labour is setting a “Built in Britain” test for UK military hardware as it steps up its fight for the bumper defence deal to stay on these shores.

The battle comes as a major Whitehall defence and security review is underway and currently a Spanish-led team is bidding for the work to build the Royal Navy supply ships.

“For five years, defence ministers have dithered over this decision when it’s a no-brainer to build these vital new ships in Britain,”said John Healey.

“They are selling Britain short by not putting the work into UK shipyards. No other major military nation has ordered naval support ships from foreign yards.

“This is one test by which we will judge the government’s new integrated review of defence and security,”he added.

For national security reasons, Royal Navy warships can only be built in the UK. But the government has said the FSS ships as part of the Royal Fleet Auxiliary, are not classed as warships – meaning they can be built abroad.

It’s a point strongly rejected by the unions’ campaign group, the Confederation of Shipbuilding and Engineering (CSEU)in which Unite plays a leading role. Labour’s support was very much welcomed by the CSEU.

“We very much welcome the ‘Built in Britain’ test and believe it should be applied to every major industry project that is funded by the taxpayer in order to preserve our skills base and ability to design, build and maintain complex projects,”said CSEU general secretary Ian Waddell.

He continued, “These ships are the cornerstone for the future of the British shipbuilding industry.

“Placing the order in the UK will bridge the gap between the end of the aircraft carrier programme and the next tranche of ships on order which will provide highly-skilled employment for a generation in areas that need it most.

‘Jump at the chance’

“If the Prime Minister is serious about levelling up in the regions he will jump at the chance of building these ships in Britain as a straightforward means to pump investment into our regions and get the economy up and running again after the coronavirus lockdown.”

Initially as we have reported the competition for the contract was offered worldwide, with companies from Italy, Spain, Japan and South Korea shortlisted, along with a UK consortium.

In November the tendering process was suddenly halted – and hopes were raised the terms could be reset to boost the chances for UK firms.

But earlier this month, the Ministry of Defence (MoD) triggered fresh dismay when foreign firms were invited to take part in early plans to build the ships. The ‘prior information notice’ says the deal is open to “UK and international suppliers or consortiums offering a UK or international ship design, who are capable of either priming, providing a design and/or integrating or building FSS ships.”

In a statement to the Commons he said, “British shipbuilding, British yards produce some of the best ships in the world and we should support them as best we can and make sure our Navy get some great British-made kit. In June, a Whitehall spending watchdog said a lack of Navy support vessels will hamper Britain’s two new £6.2bn aircraft carriers.”

An MoD spokesperson said, “We continue work on the procurement strategy for the Fleet Solid Support ships and will provide further details when the current stage is completed.”

“The CSEU has been campaigning hard to protect and support our shipbuilding and ship repair industries,”commented CSEU president and Unite AGS Tony Burke.

“We won the argument to build the FFS ships in UK shipyards and Boris Johnson was quick to promise that they would be built here in the UK before the election. The CSEU and our unions will ensure that we hold him to that promise. So please sign the petition – ask your friends and families to do the same to help save skilled jobs here in the UK.”

‘Shipbuilding – very much part of our future’

He said, “As we have continually maintained, shipbuilding is not a relic, nor our yesterday as a nation. In fact, it can easily be very much part of our future – supporting skilled workers and apprentices, families and local communities as it has for centuries.

“With so many having had their lives put on hold by the cruelty of Covid-19 now being further betrayed by a government that claims to support ‘jobs jobs jobs’ and to be willing to do ‘whatever it takes’ is nothing short of an act of gross industrial vandalism.

“If ever there was a ‘shovel ready’ project, it is FSS – and it’s great to hear that Labour supports that view. It will pump prime £1.3bn into regional economies and protect 40,000 jobs in the supply chain.

“Labour believes in our incredible workforce so why can’t the government? It’s simple – building our Royal Naval Fleet Support Ships here in UK shipyards is essential to maintain both jobs and essential skills between the end of the carrier programme and future naval procurements.

“Without it, this strategically vital industry may not survive as thousands of loyal, world class workers are thrown onto the scrap heap,”Turner added.