Ireland’s ‘austerity’ is working – for profits

The Central Statistical Office (CSO) has produced its latest institutional sector accounts for the Irish economy in 2011. The title would suggest they are among the driest economic data possible – from a long list. In fact they are among the most important data available because they reveal the sources of income for all the main sectors, or classes, operating in Irish society.

This situation in Ireland is not unique and it actually represents a specific combination of general trends that apply in all the capitalist economies. The CSO has simply set these out with unusual clarity.

The chart below shows the profits of non-financial firms operating in the Irish economy (Figure 1), as well as the profit share, that is profits as a proportion of total Gross Value Added (GVA). GVA is the same as GDP, except the effects of subsidies and taxes on production are excluded. 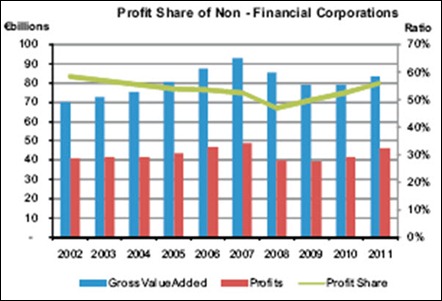 The profit share has been rising since 2008. This is when ‘austerity’ policies were first adopted in Ireland. This is not coincidental. Clearly the purpose of policy is not to foster economic growth. GDP data in Ireland is highly distorted by the activities of overseas multinational corporations operating in Ireland who falsely book activity in order to avail themselves of ultra-low corporate tax rates.

Domestic demand (primarily personal consumption, government spending and investment) has fallen continuously for 4½ years and is now 25.6% below its peak in 2007.

The stated aim of policy is to reduce the government budget deficit. However as the separate National Income and Expenditure Accounts for 2011 show from 2008 to 2011 government current receipts have fallen by €6.3bn while current expenditure has risen by just €0.5bn, a total increase in the deficit of a little over €6.8bn despite all the fierce ‘austerity’ measures (Table 21). The current budget deficit is that part of the public sector accounts which ‘austerity’ is supposed to be addressing, yet the deficit on this measure has risen from 2.2% of GDP over that time to 6.7%. Yet this policy will be maintained even though its stated objective is not being achieved.

In fact the total public sector deficit has only stabilized because the government has cut its own investment over the same period, by nearly 60%. This has exacerbated the total decline in investment (Gross Fixed Capital Formation) which has fallen at the same rate. The decline in GFCF significantly exceeds the fall in GDP. Investment has fallen by €23.6bn in the recession, compared to a fall of €14.6bn in GDP.

This hoarding of capital – a refusal to invest – is the source of the recession. A government committed to boosting the profits of the private sector would reduce benefits and pay in the public sector in order to lower private sector wages. This is what mainstream economists refer to as a ‘demonstration effect’ . At the same time the government would reduce its own investments, say in schools, hospitals, housing or transport in order to facilitate private sector investment at a later date. This is the content of current policy.

Investment has declined throughout the crisis, even after profits have begun to recover. The chart below shows the level of investment of non-financial corporations versus GVA, and the relationship between the two which the CSO calls the investment rate. 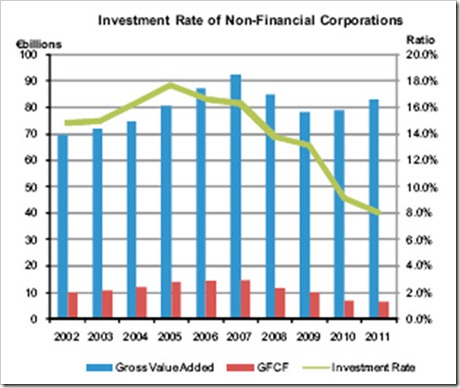 But another way of expressing the investment rate is as a proportion of total profits. The chart below shows non-financial firms’ profits versus the level of investment. Profits have risen from their low-point of just over €39bn in 2009 to €46.3bn in 2011, close to the peak in 2007. At the same time the level of investment has fallen by €9.4bn (all expressed in nominal terms, not taking inflation into account).

To put this in perspective firms operating in Ireland formerly invested about one-third of their profits before the crisis. Even this investment rate was very low by international standards. In 2011 the investment rate on this measure was that about one-seventh of all profits were invested. This is also below non-financial firms rate of capital consumption, which was €8bn in 2011. They are producing profits but not forming any new capital.

Yet this cause of the crisis points to its own resolution. A €15bn increase in investment would restore all the output lost in the recession. A larger increase would be required to restore the entire loss of investment. The alternative is to allow firms to continue to hoard capital, with all the consequent damage to the economy, living standards and jobs that entails. At some point in the future they are likely to resume investment even on current trends. But that would required an increase in the profit rate and, with the economy stagnating, that could only arise if living standards and wages are driven even lower.

First published on the Socialist Economic Bulletin on November 10th and re-published with permission.