One Hundred USW members and allies from trade unions from Texas and around the world visited the Houston offices of multinational corporation Glencore on February 26th to present the company with a silver medal in in recognition of its second-place finish in the 2015 Public Eye Lifetime Awards for corporate irresponsibility.

The delegation, led by members of USW Local 235A in Gregory, Texas, included USW oil workers, members of the Service Employees International Union, and union reps from Unite in the UK (USW’s sister union in Workers Uniting),  Australia and South Africa.

Sherwin Alumina, a subsidiary of Glencore, illegally locked out 450 members of Local 235A on Oct. 11 after the membership overwhelmingly rejected a contract proposal that demanded steep cuts in benefits for both active employees and retirees.

“This company’s bad behavior doesn’t begin and end at Sherwin. Glencore has mistreated workers and harmed communities on nearly every continent. When a company that generates hundreds of billions in revenue each year consistently engages in this kind of reckless behavior, there must be consequences,” said USW District 13 Director Ruben Garza. 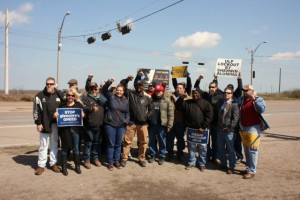 Unite activist Charlotte Upton, who is an electrician at Tata Steel in Scunthorpe, England, has taken part in labour solidarity events in Cuba, Palestine and Mexico on her first visit to the United States she said: “The way that our brothers and sisters are treated is disgusting. It’s important that we recognize that we have the same struggles. We need to stand together.”

Patrick Mathebane, of the National Union of Mineworkers (NUM) in South Africa, said that the only way to win against global corporations is to fight them on a global scale.

Mathebane said Glencore recently announced its decision to close the Optimum Coal Mine in Mpumalanga, a move that shocked union members and could put more than 1,000 people out of work.

“We are aware of what Glencore’s approach is around the world,” Mathebane said.

Alan Scott, a member of Australia’s Construction, Forestry, Mining and Energy Union (CFMEU), works at Glencore’s Clermont coal mine in north-eastern Australia, and is currently in a battle with the company over his illegal discharge.

“It’s important that we come together and gain a better understanding of what’s going on around the world,” Scott said.

Glencore, the 10th-largest company in the world with net income of $4.6 billion in 2013, finished ahead of Wal-Mart and behind only Chevron in the Public Eye online vote. Allegations of firings, anti-union intimidation and tax evasion have followed Glencore to work sites all over the world, from the United States to Australia, South Africa and South America.