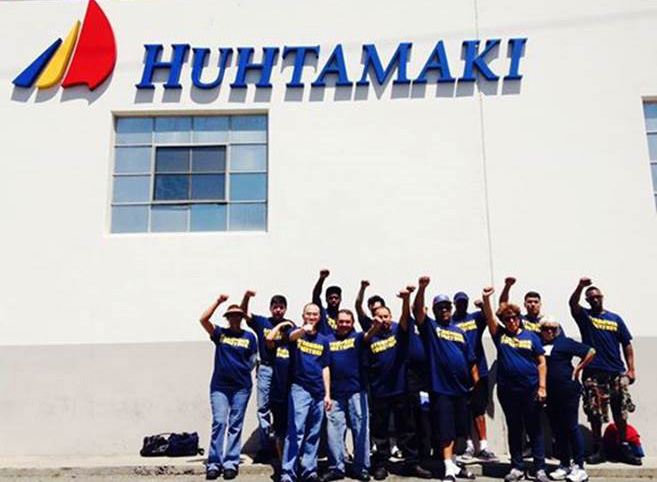 Huhtamaki workers in Commerce, California. They do not have the protection of a union, but they bravely stood up and demanded that management respect their right to engage in collective action.

That Starbucks cup that held your morning skim latte or the Chinet paper plates you’ve got packed up for a picnic this weekend were likely made by workers at one of Huhtamaki’s 21 plants in the United States, where more than 3,500 people work for the global Finnish packaging and paper products corporation.

At Huhtamaki’s Commerce, California plant, workers asked management to “engage in a good faith dialogue” about working conditions in the plant where temperatures can reach 100 degrees or more and where workers are subject to a disciplinary system they say management uses “only as a tool to punish workers.”

The letter they presented to Huhtamaki’s plant managers also urged those managers to refrain from retaliating against the workers for their actions.

Said one worker: “We knew that when we tried to talk to management about these issues individually, nothing changed. When we all got together we realized that if we all asked for changes together, there was no way they could ignore us. All we want is for them to treat us the same way they treat their union employees”.

While the Huhtamaki workers in Commerce do not have a union voice, they do have union support from the workers at the six Huhtamaki facilities where workers enjoy the protection of a union contract.

Five are United Steelworkers (USW) bargaining units and the other is represented by the Retail, Wholesale and Department Store Workers/UFCW (RWDSU/UFCW). Many of the company’s other plants around the globe in the United Kingdom, Brazil, New Zealand and elsewhere are also unionised.

Those union workers have been sending messages and photos of support to their non union Huhtamaki brothers and sisters in California.

Another worker said: “It’s really great knowing that other Huhtamaki workers around the country are supporting us today. I feel like the company will have to listen to us now”. 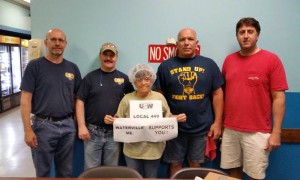 Huhtamaki is expanding its U.S. operations and a new report from the USW and the AFL-CIO reveals how the company’s expansion strategy in the United States is creating low-wage, precarious employment while threatening the job security and living standards of unionised employees.

The report details how Huhtamaki is leveraging local and state subsidies and tax breaks and instead of providing good jobs for the communities it expands into, the company is using an increasingly low-wage, minimal benefits temporary workforce.

It also outlines cutbacks in occupational safety and health spending that are impacting workers in the plants, Huhtamaki’s use of a union-busting law firm to combat workers’ initiatives to organize and its moving of product lines to its nonunion plants.